A Hat Full of Sky by Terry Pratchett


I have to confess, I have always avoided all books written by Terry Pratchett which involved Discworld. I am not sure why, I think I had imagined them perhaps to be silly or science fiction based and basically not for me. Until, a friend, who has a very similar taste in books lent me this book to try and entice me into Discworld. I still had my doubts and many a time I thought I just won't read it, but as this is a year about reading new authors and venturing into new genres, I approached the book with trepidation, hoping that my groundless opinion would change.

Well it did. I am so glad I started with this book and I have to say with relief that I thoroughly enjoyed it.


The story is the second one in a trilogy about Tiffany Aching, a trainee witch. The first one is called The Wee Free Men, which I will have to go back and read and the third book is called Wintersmith, which Alison has also kindly lent to me. Nymeth mentioned in my previous comments that she had read The Wee Free Men and wondered whether A Hat Full of Sky would stand as a read alone book. Without having read the first book, I would undoubtedly answer yes to that question.


In this book, Tiffany goes to live with another witch called Miss Level, to be her apprentice witch, allowing Tiffany to improve her skills. At first Tiffany is very homesick and comes across a lot of strange occurrences within Miss Level's house. There is a strange presence there, a cleaning obsessed poltergeist called Oswald and two Miss Levels, who are not twins, but exist as one person.

Whilst Tiffany is carrying out her training with lots of difficulty, she is pursued by an ancient spirit called a Hiver, which is made up of all the minds of all the people it has previously inhabited and killed. It has taken a liking to Tiffany and pursues her across the country.

Since the last book, Tiffany has learnt a very special magic trick, that is normally only carried out by very experienced witches; Tiffany can leave her body and look at it from afar. Unfortunately for Tiffany when she steps out of her body, the Hiver jumps into her mind, making her embark on a path of evil and destruction. With the help of the Nac Mac Feegle ( little blue fairies who fight and drink a lot and helped Tiffany in the first book), Miss Level and the greatest witch ever, Mistress Weatherwax, Tiffany has to show the Hiver a different path before it completely takes over her body and mind and kill her. On this difficult journey, Tiffany realises that she actually is a very talented witch.


This story is aimed at children and young adults and I am glad I read this as my first introduction to Discworld, as it was not as complicated as I thought it might be. I found it really rather funny; the language and the actions of the characters constantly making me chuckle. The Nac Mac Feegle are hilarious in the way they talk and their constant stupidity.


Within the story, there are lots of references to a white horse similar to the Uffington White Horse, which can be found in Oxfordshire. 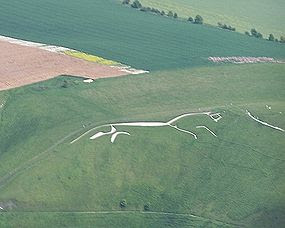 Tiffany grew up, living by the horse aand in this book she wears a silver version of it around her neck. The horse also helps her in the resolution of the story.

If you are like me and weary of reading any of the Discworld books, I would recommend this as a starting point. I hope to start reading Wintersmith later this week, which will satisfy my interest in Tiffany's continuing story. I will definitely take a closer look at other Terry Pratchett books and hopefully I will get the chance to read a lot more of them.

Please let me know if you have read any of Terry Pratchett's Discworld books and let me know if there are any I should add to my TBR list.
at March 03, 2009