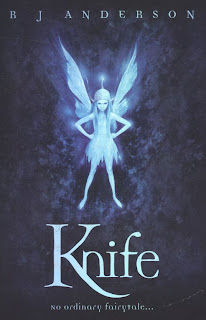 Before I say anything about this book, I have to say I just loved it. I loved it so much, that I know now I am going to have to buy it and have as one of those books that you just keep in your collection. It will definitely be read again.
But first things first though, let me tell you a little bit about it so you can make your own mind up about it.
The story is about a faery called Bryony who desperately wants to leave the world of the Oak Tree to see what happens outside. It is very rare for any of the faeries living there, to venture into the outside. The only faeries ever allowed out are the Gatherers who gather berries and seeds for everyone to eat and the Hunter who catches and skins all their meat. Everyone else stays inside. There are no male faeries, only female ones; when they die, they disappear and an egg is left behind, from where a new faerie hatches.
As Bryony grows up, she still dreams of seeing the World outside and gets her chance when she is chosen to train as the new Hunter. Bryony becomes the best Hunter the faeries have ever had and is granted the wish to change her name to Knife ( what a cool name for a faery). She chose this name after an obsession with creating the best weapon to kill prey with and her bravery at stealing a metal blade from the house where the feared humans live.
Whilst Bryony is outside, she becomes fascinated by the people living in the house by the tree. She befriends a young teenager, paralysed in a car accident and helps him to feel good about himself and empower him to be creative.
When the Queen of the Oak finds out, she does everything she can to stop the friendship as she believes humans to be too dangerous for faeries to know. Knife sets out to prove to the Queen that faeries need contact with humans in order to evolve and to help the sick faeries recover from a disease called The Silence, which basically causes faeries to lose the will to live.
I won't tell you any more, because I don't want to give the story away.
I was very skeptical about reading this before I got it out from the library. I had enjoyed Tithe and thought that this might be a really tame version of that. After reading the first page, I nearly put it down, as the first couple of scenes reminded me of The Borrowers, where Arriety is desperate to go outside and where Pod is seen by a 'uman'. However, that is where the similarity ends and after that I was gripped. The story is just as enjoyable as Tithe, though there is none of the vulgarity in it, which I found in Tithe.
Knife is a very strong character, who is desperate to live her life the way she wants to. She has a constant dilemma between helping her fellow faeries and living to her own needs. The relationship between Knife and Paul the human, is beautiful and at first I had not seen any romantic intentions between them as it was so subtle, but as you reach the end of the book it blossoms.
The Queen of the Oak tree is an unusual character and I couldn't make out if she was really good or bad, as she seemed to walk a very thin line between both.
Overall, I loved this book, it was beautifully written and charming too read. It is a romantic story with a twist. It is definitely a faerie story for the teenagers of today, but I would also recommend to adults too. It made me wish there were faeries living at the bottom of my garden.
I almost feel that faeries are finally coming of age, they are no longer seen as the domain of children, but can stand up their shoulder to shoulder with the teen fictionals characters of vampires, witches and demons. 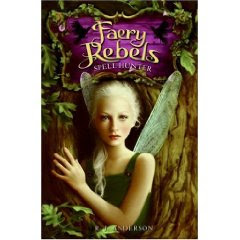 As I understand from reading the sites connected to this book, it is known by a different name in America and Canada. There is it called Faery Rebels: Spell Hunter. Here is the cover for you. I have to say I prefer the Knife cover as it looks more sinister and would probably attract more adults to read it.
This is the first book by R.J Anderson and I hope she writes many more, which I can then add to my collection. She has a live journal here which she keeps regularly updated. She also has some short story and novellas featured here, if you felt like trying out one of her stories first. I look forward to reading these at a later date.
Did I mention earlier, how much I loved this book, well I did, just in case you forget. If you like Holly Black, Cassandra Clay or even Stephanie Meyer, you will definitely enjoy it, so go forth and buy it, but someone leave me a copy so that I can have one of my own to become one of those well loved, well read books we all cherish.
at March 13, 2009