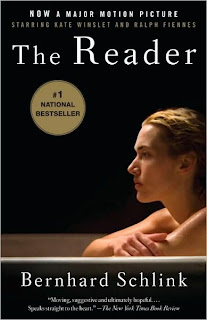 I have to say I was a little wary when I took on yet another challenge in the form of the 1% Read, but I am so glad I did, because I don't think I would have got around to reading this book as quickly as I did and I thought it was wonderful.

The book is in three parts and each part deals with the relationship between an older woman,Hannah Schmitz, and Michael, a fifteen year old boy coming to terms with puberty.

The first part of the book is about the illicit and illegal affair that occurs so naturally between them. Michael is completely infatuated by Hanna, a ticket girl from the trams, who helps him when he is really sick. He cannot keep away from her and Hanna takes advantage of this situation and the two become lovers. She is everything to Michael and he will do anything she requests. They begin to spend every spare moment they have together. Their relationship follows the same pattern, they shower, they make love and then Michael reads to Hanna. She loves to hear him read and participates in all the stories he reads to her,commenting on characters and story lines.

One day almost a year after their affair begins, Hanna just disappears. Michael discovers that she had left her job and moved out of her house, with no forwarding address. Michael is heartbroken and it takes him years to get over it.

The second part of the book follows Michael's unexpected discovery of Hanna. He is a law student working on a case against people who had worked for the Nazi's during the War and were guilty of being involved in the of murders of so many Jewish people. Hanna is accused of allowing many Jewish women to die in a fire in a church, when she could have let them go. Hanna is one of a few of women charged with this, but she is completely unprepared for the trial. It then occurs to Michael, that Hanna is unable to read or write. She was unprepared for the trial, because she had not been able to read any of the information provided for her. Hanna is scared to reveal her inabilities and ends up being jailed for twenty years, because she would rather say she wrote a document that condemned her, than admit her inabilities.

The third part of the book looks at a new relationship that develops between Michael and Hanna during her prison sentence. Michael, older, divorced and wiser, starts to record books on tape for Hanna to listen to. For many years, he sends the tapes to her without any written response. Eventually she writes back to him, telling him what she enjoyed about the book and showing her new skill of writing. I won't give away the end, as I feel I have revealed so much of it already.

This story is beautifully written. Even though, you are aware that the relationship between Michael and Hanna is wrong, the way it is written shows a young boy's innocent love for an older woman.

The following passage explains how many must have felt.

'At the same time I ask myself, as I has already begun to ask myself back then: What should our second generation have done, what should it do with the knowledge of the horrors of the extermination of Jews? We should not believe we can comprehend the incomprehensible, we may not compare the incomparable, we may not inquire because to inquire is to make the horrors an object of discussion, even if the horrors themselves are not questioned, instead of accepting them as something in the face of which we can only fall silent in revulsion, shame and guilt.'

You may wonder why Hanna had become involved in the extermination of Jewish people, until you realise that she literally fell into the job, all because of her inability to read. Whenever reading and writing came up in her life, she ran away to a new start. Her life would have taken a completely different route, if she had admitted in the beginning that she was unable to read and write. You can not help but feel sorry for Hanna, because her life was destroyed because she was too proud to admit she needed help.

When discussing the title, you realise that Michael is not the main Reader of the book, but the book is actually referring to Hanna. Although she was unable to read herself, she loved books and devoured all the stories that were read aloud to her, even in the concentration camps.

I would definitely recommend that everyone read this book. It is a very powerful story, which deals with very strong issues. It is also a beautifully haunting book, that will stay in your memory, long after you have read it, showing that you cannot be held responsible for the actions of other. It had the same affect on me as the first time I watched Schlinders List back in the nineties.

Bernhard Schlink has written quite a few books, his latest book is called Homecoming. He has also produced an international best seller titled 'Flights of Love', ( short story collection) which will be added to my ever growing TBR list.

That's all for now, thank you for taking the time to read my ramblings.