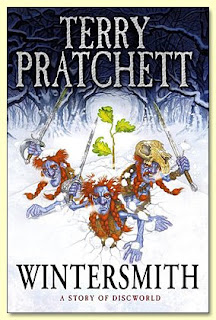 Wintersmith by Terry Pratchett
Pages - 399
Challenges - YA, 100+ and A to Z Title
This is the third installment in the Tiffany Aching series, which is aimed as young adults. In this book, Tiffany is now 13 years old and her reputation as a witch is growing. She is now living and working with the ancient witch Miss Treason, who keeps everyone around her living in fear of her.
Whilst living with Miss Treason, she is taken to see a dance. Tiffany finds the dance entrancing and cannot help getting up to join in, despite the protests of all the other witches. Before Tiffany knows what she is doing, she is caught up in the dance that depicts the changing of the seasons. During the dance, she attracted the interest of the Wintersmith, who basically is the elemental which gives us the effects of winter. He can summon snow showers, create icebergs and freeze windows.
For the first time in his entire existence, the Wintersmith has fallen in love with a human and searches for her, wishing to make her his wife. He studies humans to find out what they are made of and creates a body for himself. During his pursuit of Tiffany, bad things start to happen around Tiffany; the Wintersmith has no intention of making way for Summer and causes ships to hit icebergs and sink, he creates heavy snowfalls which kill the Spring lambs. His pursuit causes disaster and havoc all around the country.
Regular readers of my blog will have seen my review of the second installment of this series (A Hat Full of Sky) last week. I have to say I enjoyed the third book, but I think I preferred the second book better. I found the second book a lot more fast paced than this one. Also I really enjoyed the Nac Mac Feegle in the second book and although they appear in the third book, they play a minor role. From the reviews I have read, a lot of people enjoyed this last book the best, but I definitely think the second one is better.
It was nice to return to the story of Tiffany and watch her cope with the growing pains of teenagers. She is lot older in her mind set in this book and her growing up allows her to consider love for the first time. I loved Miss Treason, who played at being a witch, by giving the local people what they expected to see. The chapters dealing with her prediction of her death were hilarious.
I am amazed at the subject matter that Terry Pratchett creates. The idea of winter coming alive and wishing to be human is an unusual concept,but really very interesting and also believable. His characters are interesting and they all have unusual flaws in their nature.
I will read some more of Terry Pratchett books at a later date, now that I have found my way into this strange world. I hope to look into the Wyrd Sisters books by Terry Pratchett,which also deal with witchcraft.
If you have read this book, I would love to hear your thoughts on it.
As for me, I think I have had my fill of Terry Pratchett for now, but I will come back at a later date for more.
Thanks for stopping by.
Here are other reviews of this book.
Nymeth
at March 09, 2009