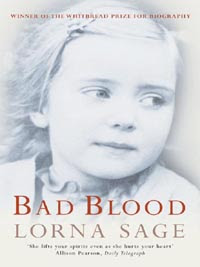 Pages - 281
Challenges - Non Fiction Five, 100+, In Her Shoes Challenge
This book won the Whitbread Prize For Biography in 2001.
I am also a little wary of biographies that have titles like Bad Blood, because there has been such an influx of biographies dealing with children being abused, that I am always concerned it is going to be of the same vein and I just can't read books like that. Luckily this book is not like that at all. It is quite a tragic story but there is nothing in it that would have made me not read it.
This memoir looks at three different marriages within Lorna's family. She looks at how these relationships made her the person she became. By being an integral part of her family, you realise why she strived so hard in her later life, as if she was always trying to clear the family name.
The first part of the book looks at the very destructive marriage of Lorna's adored grandfather, the local vicar who introduced Lorna to her love of books and her grandmother who never really grew up and took charge of her family and responsibilities. Her grandfather became destroyed by this unhappy marriage in the end and moved on to having two affairs, the second affair with his daughters best friend which shocked the small village they lived in and ruined his reputation.
The second part of the book deals with the marriage of Lorna's mum and dad. Lorna's mum never really recovered from her father's affair with her best friend. She spent most of her marriage secluded in her own house, also unable to take responsibility for her home and her family. Her father kept up a front by covering for her mother and obviously loved her completely.
The third part looks at the early relationship and marriage between Lorna and her husband Vic. Lorna ruined the family name and was seen to follow in her grandfathers footsteps by causing scandal to the family. Lorna fell pregnant before she left school and had to deal with the affect it had on all the family. During that time, it was the worst thing a girl could do, to be pregnant out of wedlock and she had to fight very hard in order to keep her child and to carry on her education. She eventually went on to university and Vic and Lorna were featured in the Daily Mail as the first married couple to graduate in the same subject at the same time and both get Firsts.
All through Lorna's life, you read about her love of literature, which she grasped with both hands from a young age. She had never needed much sleep and her doctor prescribed her with a light and a set of books to keep her occupied through the hours she no longer need to sleep through.
I enjoyed this book, it was interesting to be able to compare the three different marriages, but I would have liked the section on Lorna to be a bit longer. From the book, it is very clear how much Lorna adored her grandfather and writes about him in a way to try and win his redemption from everything wrongdoing he committed. She often writes scornfully about his antics, but there is definitely a firm underlying love for him. From the first couple of sentences you are aware that her grandfather wasn't your run of mill vicar. I couldn't help but think of the drunken vicar in Father Ted. See what you think.
' Grandfather's skirts would flap in the wind along the churchyard path and I would hang on. he often found things to do in the vestry, excuses for getting out of the vicarage (kicking the swollen door, cursing ) and so long as he took me he couldn't get up to much. I was a sort of hobble; he was my minder and I was his'
The book is partly set in places that are familiar to me, such as Tonypandy is South Wales. My family come from there and my aunt still lives there. Lorna's grandmother owned the little shop up amongst the houses and I couldn't help but imagine my nan visiting the shop when she lived there as it would have been one of a few shops in the area.
It was an interesting biography and I am really glad I read it. I don't know if I would have picked it myself, so I thank Annie for lending it to me. I would definitely have liked to read more about Lorna, but she obviously felt that the story of her grandfather was more interesting than her own life story. Personally I found her own story gripped me more, as she defied the way teenage pregnancies were treated during that era and went onto pave the way for other young unmarried mothers to achieve an impressive education and further along the line have a really successful career.
Lorna Sage was a professor of English at the University of East Anglia and also wrote a couple of non fiction books. She passed away in January 2001 after witnessing the success of her memoirs.
Has anybody else read this book?Thanks for stopping by.