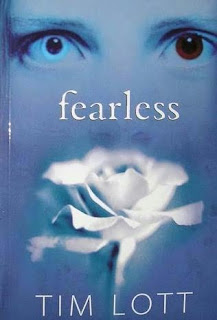 This is an unusual book would be enjoyed by anyone who like 1984 by George Orwell, as there are undertones of it running throughout the book. On the back of the book, it is noted as a chilling and compelling fable of the future.

This is a story about one persons fight to change the world as she knew it. A young girl demanding to live her life with the freedom of speech and spirit.

The story is about a young girl only known as Little Fearless, who has been taken away from her mother to the City Community Faith School, where it is believed that the girls are treated well and given a good education, to stop them from ever doing anything remotely bad again. However, this is in no way a school and is more like a concentration camp. There are one thousand girls at the school who labour away each day, washing and ironing the city's washing. They are fed very little and treated like prisoners. The children are desperate to see their families again and to tell them how they are treated, but they have no means of escape and besides they are unsure if anyone would ever listen. Little Fearless is different from the rest of the girls, as she believes that she can make a difference and with the help of Stench, the refuse keeper, she manages to escape three times from the institute to tell some of girl's families what is happening inside the Institute. However, her efforts are in vain and none of them believe her and on her final return to the Institute is treated abominably.

The world they live in is a fictional one, where the land is made up of squares, where in the centre of them all, the residents go to church. They are led by the City Boss, who removes anyone who goes against what he believes or questions his actions. He constantly dictates to them how they should live via video screens. You begin to feel like every human has been brainwashed into acting a certain way.

This book is very sad and the ending had me in tears. The struggle that these children face in the book and the way they are degraded and made to feel like they are invisible made me feel very uncomfortable.

I am glad I read the book, though I am unsure whether I enjoyed it, as it is one of those books that hits a nerve. I can't stand reading about children being treated badly and have never been able to read those true life stories about children's terrible upbringings.

This book did remind me so much of 1984, which I read at school as a teenager. I did not enjoy that at the time because I think I was always fearful that it would become our reality. However after reading this and now being older and wiser(older, yes, wiser, I think) I would like to read it again to see how accurate or inaccurate George Orwell's prophecy of the future was.
If you would like to rea 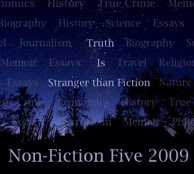 d a fable with a difference, then I would definitely recommend this one.
On another note, just to let you know I have joined another challenge set over at Trish's Reading Nook. This one is to read five non fiction books between May and September 30th 2009, so there is plenty of time if anyone else wants to join in. Now I am really not a big non fiction reader, but I am now prepared to change that by having a go at this challenge. Anyone else interested in joining - the challenge is here.
I have a few possible books that I hope to read and they are as follows.
1) America by Stephen Fry
2) Long Way Down by Ewan McGregor and Charlie Boorman.
3)Treasure Islands: Sailing The South Seas in the wake of Fanny and Robert Louis Stevenson by Pamela Stephenson
4) The Bookseller of Kabul by Asne Seierstad.
5) Edgar Cayce on the Akashic Records by Kevin J. Todeschi
Wish me luck - anyone else joining in? If you are what books have you planned to read?
at April 03, 2009