I have found cupcake heaven!

I was recently told about this shop by one of my friends and just had to visit. We tried to go on my birthday, but unfortunately it wasn't open, so we went back this week. This is a cafe called Parklife, where they have started selling lots and lots of different cupcakes. We had lunch there too, which were real doorstop sandwiches, then all devoured a cupcake. 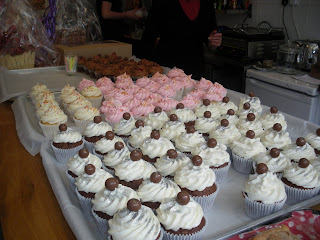 From what I can gather the flavours of the cupcakes change daily, so there is always a reason to go back for more. 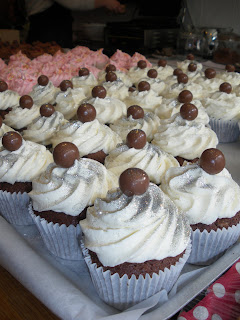 They were all sparkly cakes and I am now desperate to find out where to get edible sparkles but the shop owner would not reveal her secret! 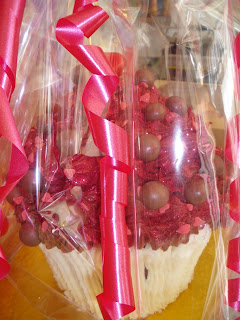 You can even buy large birthday cake cupcakes. 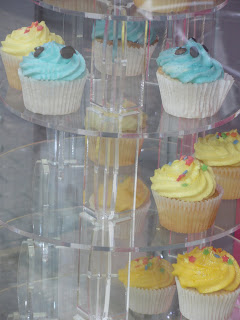 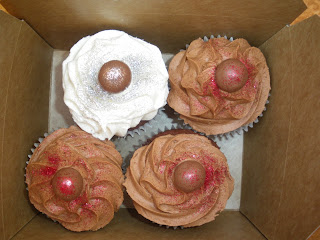 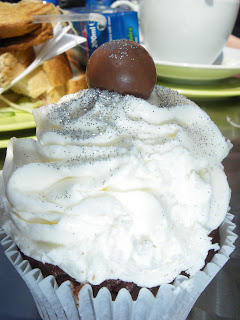 This is mine before I devoured it - the diet was put on hold for this day.
We had a lovely day and our main reason for going was because Methvens was closing down. This is the second bookshop to close in our town due to the recession. I am just keeping my fingers crossed that Waterstones won't close as that is definitely my favourite shop.
As I still had my birthday money to spend I couldn't stop myself buying some more books in the sale. This little selection would have cost me nearly £30 and I only spent £13! 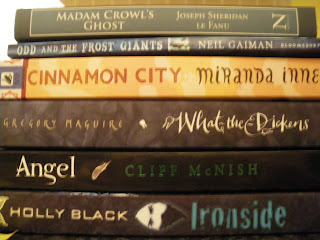 The book I bought are as follows:
Madam Crowl's Ghost by Joseph Sheridan Le Fanu. This is a collection of short stories by the Master of psychological suspense. One of his novella's was the inspiration for Bram Stoker's Dracula and he is widely regarded as the father of the Irish Gothic style.
Odd and the Frost Giants by Neil Gaiman - this is a little novella he wrote for World Book Day and is about a boy named Odd who has run away from home and encounters three creatures on his journey. He has to take on the Frost Giants in order to end winter.
Cinnamon City by Miranda Innes - this is non fiction travel book, detailing Miranda's move from Andalucia to Marrakech to restore a long neglected riad there. I love books like this.
What the Dickens by Gregory Maguire, writer of Wicked. This book is about a dark and stormy night where three children are trapped by a terrible storm. One of the children starts to tell them a story about warring tooth fairies.. The children are skeptical, but stories told by candlelight have a way of coming true.

Angel by Cliff McNish - This is the story of two girls, linked by destiny, not choice. Stephanie is a strange misfit and Freya can't stop seeing angels. What happens when one of those angels starts to stalk her?
Ironside by Holly Black - this is the sequel to Tithe which I read back in February. It continues the story of Kaye, who has only recently realised she is a faerie. This is a dark tale and not for young children. 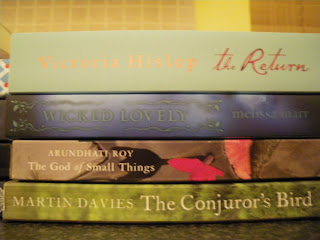 I also picked up the following books in other shops.
The Return by Victoria Hislop. I just had to buy this one as I loved her first book The Island about a colony of lepers. If you haven't read it, you really must. The Return is set 1936 in Granada and is about politics and tragedy in Spain.
Wicked Lovely by Melissa Marr - this is the first book in her Wicked Lovely series - a faerie romance story. I do like reading about faeries.
The God of Small Things by Arundhati Roy - winner of the Booker prize. I picked this up in the charity shop and it explores the tragic fate of a family and tampers with the laws of who should be loved by who and how.
The Conjuror's Bird by Martin Davies - a Richard and Judy bestseller about Fitz and Gabby's pursuit of a stuffed bird known as the Mysterious Bird of Ulieta, a creature once owned by the great 18th Century naturalist Joseph Banks.
Quite a good collection for a day's shopping.
Have you bought any new books recently?
at April 18, 2009