Secret of the Sirens by Julia Golding 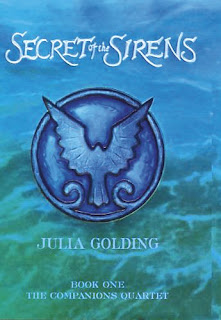 Book 1 in the The Companions Quartet.

This story is a children's novel and follows the gripping tale of Connie upon the discovery that she is a universal companion.

What's that I hear you ask?

A universal companion is a person who can communicate telepathically and work with any mythical creature.

For most of Connie's life, she has had a strange effect on animals of all kinds. She had to be removed from quite a few schools because she caused so much commotion with the school pets. So in desperation, Connie's parents send Connie to live with her eccentric aunt who Connie really isn't sure about.

Kullervo, a very dangerous mythical creature is set to ruin the world and bring it back under the control of mythical creatures. He has turned the Sirens first, who are part women, part bird and known to lure sailors to their death by using an enchanting song. They are responsible for recent deaths in the area of workers at the new oil refinery in town. The Sirens are intent on causing as much damage as possible to the oil refinery and the society and their mythical companions need to stop them. Connie is thrown into a dangerous, gripping ride to save the town, the people, the Sirens and herself.

This book really gripped me from the beginning. The descriptions within are vivid and detailed, you could actually picture yourself in the scenes. Connie is a strong and interesting character and you are rooting for her from the very beginning. The mixture of fantasy with reality is of equal balance, so you could actually believe the story to be true. There is a little touch of the Dr Dolittle lifestyle going on, but she can talk to the animals, even if they are mythical ones at that.f

I would definitely recommend it and I am looking forward to reading the second book in the series of four.

This was Julia Golding's second book and she has gone on to write three more in the series and quite a few other books too. Her first book The Diamond of Drury Lane won both the Waterstones Children's Book of the Year and the Nestles Children's Book Prize in 2006. There is a website connected to the quartet of Companion books where children can take a test to see if they could be a companion, you will find it here.

I for one will definitely be searching out some other books by Julia Golding.

Have you read any books by Julia Golding?