This is the first time in a long time I actually received my books through the mail.
I had order the Melissa Marr trilogy as I got them for such a wonderful price. They should retail at £6.99 and I got the lot for £7.99, so they were a bit of a bargain. I have read such rave reviews about them, that I can't wait to read them. When I do read and review them, I will also have a little competition to add into it. So keep your eyes peeled.
I also bought Envy by Anna Godberson at £2.99, so that was a good bargain. 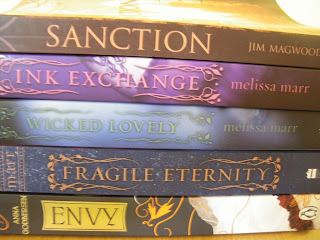 I also received Sanction by Jim Magwood, which I am reviewing for You Gotta Read Reviews which you will find here. The author sent me a lovely letter and signed my copy of the book too. I never realised how nice authors were, as I also received a lovely email this week from a first time novelist Kimberly Alan who was really pleased with my review of her book. Her book was called Truths Unveiled and you can read my review here. 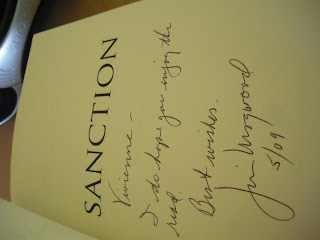 I thought I would also take part in Library Loot this week, as I came out with more books than I went in with. I took the girls to change their books and just got lost amongst lots of lovely books. I bought two of them as they were being withdrawn. I bought Chocolate Chip Cookie Murder by Joanne Fluke, which is a cozy murder mystery and I also bought After the Dance by Edwidge Danticat, which is about a walk through carnival in Jacmel, Haiti. This is one of the Carribean's biggest carnivals and Edwidge takes a close look at what it is like, also reminiscing about unhappy visits to the carnival as a child. 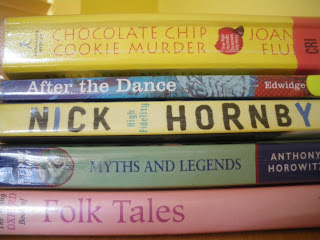 I also picked up The Hunger Games by Suzanne Collins, which isn't shown. I have been waiting a few weeks for this as I had it on order. I am desperate to read it as there has been some fantastic reviews of it in the book blogging world.

What books did you pick up this week?

I haven't managed to visit many blogs this weekend as I have been away. We went up to Essex for my dad's 70th birthday. We had a lovely party there yesterday and it was so nice to see all my family again.

We had a bit of a disaster with the birthday cake. I managed to get it all the way to Essex and then broke off one of the numbers when I put it on the table. My dad went from being 70 to zero! Luckily dad is a good sport and thought it was funny. Doesn't he look good for 70? 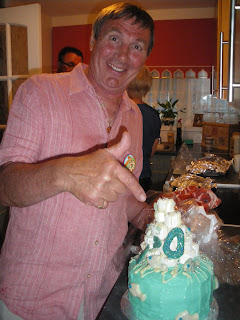