I have had such a busy weekend, I feel like my blog has been a little neglected. I haven't been able to visit many people's blogs, so I shall be playing catch up today to try and visit as many as possible.
I have received a couple of lovely emails this week from Miranda Innes who wrote Cinnamon City which I reviewed here and she has promised to come on my blog when she gets back from her latest crisis in Marrakesh, where she has found her manager has chased away her English visitor! Hopefully she will be able to tell us all about it next month.

I have received a few very lovely books this week. 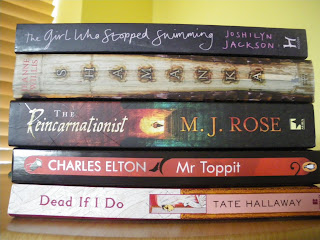 Dead If I Do by Tate Hallaway, which I won over at Ladytink's site which can be found here.

The Reincarnationist by M.J Rose, which you may remember me raving about last week. I managed to pick this one up in the charity shop, so I was really chuffed.

Mr Toppit by Charles Elton - I kept seeing this book around and became quite intrigued by it. When I saw it in the charity shop I had to have it.
Here is a summary of it from Amazon.

And out of the Darkwood Mr Toppit comes, and he comes not for you, or for me, but for all of us. When The Hayseed Chronicles, an obscure series of children's books, become world-famous millions of readers debate the significance of that enigmatic last line and the shadowy figure of Mr Toppit who dominates the books. The author, Arthur Hayman, an unsuccessful screenwriter mown down by a concrete truck in Soho, never reaps the benefits of the books' success. The legacy passes to his widow, Martha, and her children - the fragile Rachel, and Luke, reluctantly immortalised as Luke Hayseed, the central character of his father's books. But others want their share, particularly Laurie, the overweight stranger from California, who comforts Arthur as he lies dying, and has a mysterious agenda of her own that changes all their lives. For buried deep in the books lie secrets which threaten to be revealed as the family begins to crumble under the heavy burden of their inheritance. Spanning several decades, from the heyday of the British film industry after the war to the cut-throat world of show business in Los Angeles, Mr Toppit is a riveting tale of the unexpected effects of sudden fame and fortune. Not since Jonathan Coe's What a Carve Up! has a novel managed to capture a family and a society to such wonderfully funny and painful effect.

The Girl Who Stopped Swimming by Joshlyn Jackson. This one has been making the rounds of the blogging world and after reading so many excellent reviews I was over the moon to find it in a little shop called Choc A Books which sells all it's brand new books for a pound.

Shamanka by Jeanne Willis is a YA book also from the Choc a Book shop. Here is a short description of it.

What is magic? What is illusion? What is real? Step into the extraordinary world of Sam Khaan, who has just discovered a witch doctor's notebook in her attic. Convinced that it belongs to her long-lost father - the son of a witch doctor - she sets out on a journey to discover the answers to these questions. In her encounters with diviners and healers, conjurers and mystics, Sam learns the truth about magic the hard way. Here is your chance to take a far easier route.