I received two books in the post this week.

Bitten by Kelley Armstrong, which is a book I won over at Teddyree's site The Eclectic Reader. So thank you ever so much for getting it here so promptly.

Voodoo Season by Jewell Parker Rhodes, which I just had to have after reading about it on Chris's site Stuff As Dreams Are Made On. I am so excited by this book and I am really looking forward to reading it. 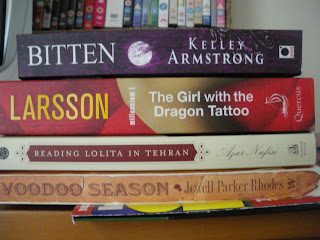 I also picked up two books from the charity shops this week.

The Girl with the Dragon Tattoo by Steig Larsson. This book has picked up quite a lot of awards lately, so I was quite glad to come across it. Steig Larsson was a Swedish crime writer who sadly passed away before his trilogy reached a worldwide audience.

Reading Lolita in Tehran: A Memoir in Books by Azar Nafizi. The blurb for this is as follows:

In 1995, after resigning from her job as a professor at a university in Tehran due to its repressive policies, Azar Nafisi invited seven of her best female students to attend a weekly study of great Western literature in her home. Since the books they read were officially banned by the government, the women were forced to meet in secret, often sharing photocopied pages of the illegal novels.
For two years they met to talk, share and "shed their mandatory veils and robes and burst into color". Though most of the women were shy and intimidated at first, they soon became emboldened by the forum and used the meetings as a springboard for debating the social, cultural and political realities of living under strict Islamic rule. They discussed their harassment at the hands of "morality guards," the daily indignities of living under Ayatollah Khomeini's regime, the effects of the Iran-Iraq war in the 1980s, love, marriage and life in general, giving readers a rare inside look at revolutionary Iran. The books were always the primary focus, however and they became "essential to our lives: they were not a luxury but a necessity", she writes.

These are all the books I received in the mail this week. What did you get?