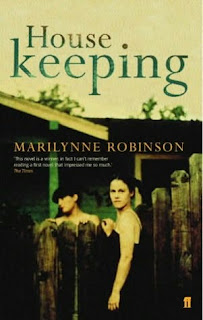 Pages - 219
Challenges - 100+ books
Published by Mackay of Chatham in 1980
This is the story of Ruth and Lucille, who are left outside their grandmothers house as their mother leaves and drives off the side of a cliff. They stay with their grandmother in a little town called Fingerbone in northwest America. As they grow up, their grandmother passes away and they have different relatives coming to look after them until their mother's sister Sylvie steps in to take care of them. Only Sylvie's way of housekeeping is not seen as normal by the outside town. The girls struggle to grow up and make their way in the life.
I found this quite a sad book to read. It seemed quite obvious from early on that there was a touch of madness within the family. For their mother to take her own life and for the strange ways of Sylvie, you feel that they have never recovered from the loss of their father, who really wasn't a big influence in their lives. Their is a theme of abandonment that follows the book through to the end and you do not get the impression that the characters have learnt from past behaviours as the pattern of abandonment becomes a vicious circle.
You could not help but feel sorry for Ruth and Lucille as they try to bring some kind of normality to their home. From Sylvie's arrival, they are constantly worried that she will leave them, as she always looks in a state of departure from them. Throughout the book, Ruth really struggles to live life Sylvie's way and eventually rebels and makes her escape from the home and tries to reshape her life. Lucille has no wish to leave the family home and with each passing day becomes more like Sylvie in her ways.
You may ask what makes Sylvie so strange. Well she has some very strange housekeeping habits. She keeps every can and magazine that enters the house. She basically never cleans and the house falls desperately into disrepair. She has no realisation or care about the girls constantly missing school. Sylvie is only brought out of her eccentricities when it looks like she may lose custody of Lucille and tries hard to conform to the rest of the towns visions of a good housekeeper.
This was an interesting story, yet I did find it a bit lengthy description wise. There was no balance of conversations in it, mainly lengthy prose about very subtle passages of time.
It is very sad to read, as you cannot help but feel sorry for the girls, who never settled into a normal childhood. Their childhood was full of so much loss.
So to sum up this book, it is a haunting story written with subtlety.
I did enjoy it, but I don't think it would come under one of my best reads of the month.
at July 07, 2009