Monday Mailbox is hosted by Marcia at the Printed Page and you will find her blog here. 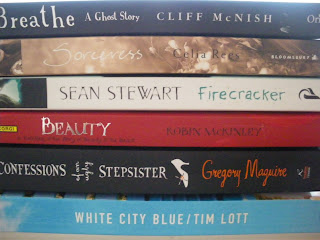 I picked up some crackers this week. A couple of scary ghost stories and a couple of old fairy tales rewritten. These all came via the charity shops - my favourite place to find books.
1)Breathe - A ghost story by Clive McNish
Jack has always had an affinity with the supernatural, people who lived long ago and whose spirits remain in this world. Following his father's death, he and his mother move to an isolated house. Instantly, Jack senses the presence of the previous owner. But he is soon aware of other spirits reaching out to claim him. I do love a ghost story!
2) Sorceress by Celia Rees. Many of you know that I do like to read Celia Rees books. This is the sequel to The Witch Child which I read last October. I am really looking forward to reading it.
3)Firecracker by Sean Stewart
When William Kennedy is six years old, he sees his Uncle Billy at a family reunion. The only problem is his uncle died 3 weeks ago at an explosion in a Petroleum plant.
For William, this is only the start. Nicknamed 'Dead' Kennedy, he realises he can see dead people all around him. With time, this just becomes part of life, although it does have its practical implications - for instance he can't drive a car because he keeps swerving to avoid the ghosts.
Now aged 32, Dead Kennedy is approached by a distant cousin who needs help - the ghost of a girl is living in his garage and he thinks William can persuade her to leave. But when William Kennedy arrives at his cousin's house, he discovers that the girl was raped and murdered and that the perpetrator was the very man who is now asking for his help.
Like I said, I do love a ghost story and this one has a real twist!
4)Beauty by Robin McKinley - a retelling of Beauty and The Beast.
5) Confessions of an Ugly Stepsister by Gregory McGuire. A retelling of Cinderella through the eyes of one of the Ugly Sisters. I have heard such mixed reviews about Gregory McGuire's books but I am determined to read them, as the story ideas fascinate me.
6) White City Blue by Tim Lott - I read one of Tim Lott's YA books earlier in the year (Fearless) and really enjoyed it. White City Blue is an adult book and has been compared to Nick Hornby's books.
Here is the blurb -Estate agent Frankie Blue is known on his home turf - White City, Shepherd's Bush - as "Frank the Fib." He's a liar - but one who always tries to tell the truth. He has been friends with Diamond Tony, a hairdresser, Colin, a computer nerd, and Nodge,a cabbie, since schooldays. Now they are thirty, and trying to live the same life as they did then - drinking, girls, coke, football. But Frankie is bored. He's decided to carry out the great "betrayal" - he's going to get married. From the moment he tells his mates, the whole patchwork of their friendships begins to collapse - revealing the sad, shocking but often hilarious truths that lie underneath. 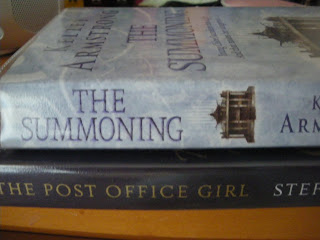 Library Loot for this week. Only two books which I ordered months ago and they both turned up at the same time.
The Summoning by Kelley Armstrong - I have started reading this one and I am really enjoying it. It is quite a quick read too. It is the first book in the Darkest Powers trilogy. The story is based around Chloe who suddenly gains the ability to see ghosts. Me and my ghost stories!!
The Post Office Girl by Stephen Zwieg - wartime Cinderella type story.
Here is the blurb -CINDERELLA MEETS BONNIE AND CLYDE IN THIS HAUNTING TALE OF THE BOOM AND BUST OF CAPITALISM” Christine toils away in a provincial Austrian post office when, out of the blue, a telegram arrives inviting her to join an American aunt she’s never known in a fashionable Swiss resort. Bowed by the grinding poverty and hardships of the post-war years and anxious about her ailing and dependent mother she accepts, only to be swept up into a world of almost inconceivable wealth and unleashed desire. She feels herself utterly transformed. Then, just as abruptly, her aunt cuts her loose and she has to return to the post office, where, yes, nothing will ever be the same.

So there you are - my Monday mailbox books and my library loot. What did you get this week?
at July 06, 2009