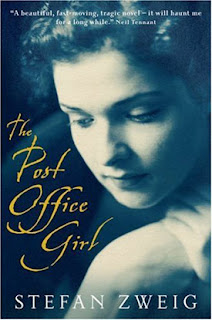 Written in the 1930's. Originally published in 1982, translated to English and republished in 2009

This book is the story of Christina, a young girl living in Austria just after World War One. Austria is in a state of collapse, their is no money and unemployment is at an all time high. Christine can vaguely remember what life was like before the war, now her life is hard, as she works in the post office all day and takes care of her sick mother all night, with barely enough money to feed them both.

As if by magic, a telegram arrives from her mother's sister, who is now a very rich American wife of a tycoon. She invites Christine to join her and her husband at an exclusive resort in the Swiss Alps. Christine immediately departs and becomes caught up in a world of luxury, inconceivable wealth and desire. She is taken over by a world she never actually believed existed and before long thoughts of home are forgotten. As she spends her days, flitting from one social occasion to another, she is unaware of the jealousy of the people she has befriended and without warning she is thrust back into her old life, as her aunt drops her without any explanation. Christine returns to her old life, but nothing can ever be the same, after experiencing so much in a short space of time. Christine is angry with everything and everyone and must come to terms with her life following a meaningless path.

When you read reviews concerning this book, they often mention the likeness to the story of Cinderella. Christine is taken away from her life of drudgery and given a fairytale existence. However, unlike Cinderella, Christine is sent back to her old life, where as Cinderella marries the prince and lives happily ever after.

I found this book a beautiful read, the descriptions were so detailed and full of imagery that you felt you could see it all with your own eyes. Here are just a couple of examples of Christine's description of the changes occuring in her life.

Where am I? Her eyes grope upward. What has happened to me? Instead of the slanting, smoke-stained, cobweb-grey attic ceiling with the brown wooden beams, a blue-white ceiling, clean and rectilinear with gilt molding, floats above her.

She looks at her hands which are lying not on the brown, patched old camel hair blanket but on a light, fluffy, blue one embroidered with reddish flowers.

Every thing is described in detail about her surroundings and the people she meets with. Even the food she eats, is described with mouth watering detail.

The book is set in two parts. The first part reminds me of Dirty Dancing (how on earth did I go from post World War One to Patrick Swayze, I really don't know!!) - the scenes on Kellerman's mountain. If you have seen the film, you will remember how everyone spent their time together, joining different activities and classes as well as eating together, almost like a posh holiday camp, well that is the impression I got of the hotel in Swiss Alps. Everyone would go out together during the day and also eat and dance the evening away together. It sounded fun, yet a little claustrophobic. Christine loved spending time with these wonderful people, completely unaware of the rumours they would eventually spread.

The second part of the book is very dark. You almost go from brightness and fun in the first part, to darkness and despair in the second. I found this second part hard going and very depressing as you felt so sorry for Christine. It is better not to have experienced a wonderful life, than experience it and lose it all again. Christine became almost suicidal, unable to bear the return to her old life.

From what I have read about Stefan Zwieg, I get the impression that the story line in this book carried a lot of similarities to his own life. The original manuscript was completed in the 1930's during a time when Zweig and his family were driven out of their homelands, into exile by the Nazis. In 1942, he committed suicide in a pact with his wife and eventually the manuscript was found amongst his papers. After reading a review in the Telegraph, I noted that a lot of readers felt it did shed light on the last few months of his life, portraying the life crushing poverty of the post war years that deeply affected him, enough to make him take his own life.

A truly enjoyable book full of darkness and light. Compassionate towards the people who suffered during the war, you cannot help but be moved and come away feeling immensely grateful for the life you lead now. I would definitely recommend this to anyone who enjoys fiction based around World War One. I found it fascinating, to immerse myself in a world I have never witnessed.

Here are some other reviews of this book.