I feel like I have been surrounded by good book bloggers this week, all declaring book bans for the foreseeable future and it sent me into a frenzy which involved me actually buying two brand new books. I can't cope with everyone being so good! I need to be rebellious. So I went out and bought Julie and Julia by Julie Powell, which I have been wanting to read for a while. I also bought Catching Fire by Suzanne Collins, which I just had to have.
I also picked up two books from the charity shops.
The Floating Brothel by Sian Rees -The Extraordinary True Story of an 18th-Century Ship and Its Cargo of Female Convicts.
The Angel's Game by Carlos Ruiz Zafon. I am really pleased with this one as it is the hardback version and it doesn't look like it has ever been read. It costs £18 to buy new and I got it for £2. Bargain. 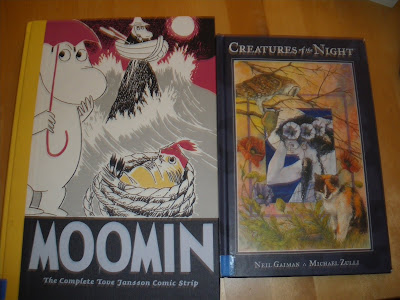 Now I did attempt to put myself on a library book ban until I have read a few of my own books. However, on returning two of my already large library selection, I came across these two graphic books.
Moomin - The Complete Tove Jansson Comic Strip - I have a real strong urge to read the Moomin books lately. I think it has something to do with the change of season as I vividly remember reading my first Moomin book during the autumn. I cannot find my original books, so I am on a quest to buy them again. So I was over the moon, when I spotted this graphic book in the library. I can't wait to read it.
Creatures of the Night by Neal Gaiman and Michael Zulli. This features two of Neil Gaimans stories - The Price and The Daughter of Owls which originally featured in Neil Gaiman's book Smoke and Mirrors. I thought this would be ideal for the RIP challenge.
So there are all the books that have entered my house this week. What did you get?