The Ask and The Answer by Patrick Ness 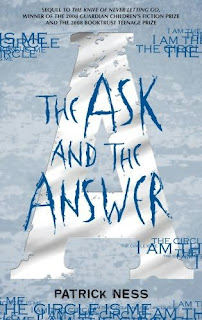 Published by Walker Books in 2009

Challenges - Fall into Reading and 100 books

The second book in the Chaos Walking Series.

'YOUR NOISE REVEALS YOU, TODD HEWITT.'

After whizzing through The Knife of Never Letting Go, I was desperate to get my hands on this one. I was over the moon when the library got it in quite quickly for me.

This book carries on exactly from where the first book finishes. This means that I can't tell you hardly anything, because that would give away the ending of book one and if you haven 't read it, you really need to.

I will give you a little taster, just to make your mouth water, so look away if you don't want to know. Todd and Viola are now living in New Prentisstown, but they are living separately. Todd is with the men and Viola is living with the women. They no longer all live together and this gives off an uncomfortable whiff of blantant sexism, which I found quite difficult to read about. The women are treated so differently from the men, just because they don't have the Noise. The men feel threatened by their superior ability and this book becomes a war of the sexes. However, as a war breaks out, you become really unsure of which side is the right side to be rooting for as there is a very fine line separating their actions, that actually become blurry. By the end, I didn't know which side was right and which side was wrong.

I found this book ran at a slower pace than The Knife of Letting Go and that I found to be a good thing, as I was left breathless by the first book. I didn't think there were as many twists and turns in it either and where the first book is full of the unexpected, I didn't find that with this one.

I liked the book, I liked it a lot, but I don't think it was as good as the first book. However, I think this book is a bit like the lull before the storm, or similar to the eye of a twister, where time just stands still in silence. I imagine the third book is going to be the most powerful of the three and I do hope I am right.

I think the main thing I didn't like about this book was that Viola and Todd were separated for the majority of the book. I liked reading about the two of them together as I found their relationship to be quite powerful. Within The Ask and the Answer, there is such distance between them, you end up feeling a little disappointed. It reminded me of New Moon by Stephanie Meyer, which I thought was the least enjoyable of the four books, as the relationship between Edward and Bella was non existent throughout that book. Perhaps I am just a hopeless romantic, but when you witness a romance blossoming, you hope they will stay together until the end.

If you have read either of these books, then you need to. Start with The Knife of Never Letting Go for the roller coaster ride, followed by a slow carousel in The Ask and The Answer and be ready for the terrifying free fall ( I have my fingers crossed on this one, please don't disappoint me Mr Ness) of the next book, Monsters of Men which is not out until 2010.