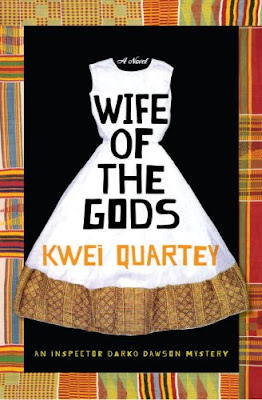 I haven't found as many books as I usually do throughout the week, but I do think that is a good thing for both my bank balance and my TBR list.

1) Wife of The Gods by Kwei Quartey

Eva over at A Striped Armchair is definitely having a bad effect on my TBR list this week, as she features twice. Eva is the type of person I would call a voracious reader, as she devours so many books in a week. I am completely jealous about her reading ability.

This book is the first of a new mystery series set in Africa. What attracted me to this story was the main character Inspector Dawson, who has anger management issues.
Here is the blurb from Amazon.
In a shady grove outside the small town of Ketanu, a young woman—a promising med student—has been found dead under suspicious circumstances. Eager to close the case, the local police have arrested a poor, enamored teenage boy and charged him with murder. Needless to say, they are less than thrilled when an outside force arrives from the big city to lead an inquiry into the baffling case.
Detective Inspector Darko Dawson, fluent in Ketanu’s indigenous language, is the right man for the job, but he hates the idea of leaving his loving wife and young son, a plucky kid with a defective heart. Pressured by his cantankerous boss, Dawson agrees to travel to Ketanu, sort through the evidence, and tie up the loose ends as quickly and as efficiently as possible. But for Dawson, this sleepy corner of Ghana is rife with emotional land mines: an estranged relationship with the family he left behind twenty-five years earlier and the painful memory of his own mother’s sudden, inexplicable disappearance. Dawson is armed with remarkable insight and a healthy dose of skepticism, but these gifts, sometimes overshadowed by his mercurial temper, may not be enough to solve this haunting mystery. In Ketanu, he finds that his cosmopolitan sensibilities clash with age-old customs, including a disturbing practice in which teenage girls are offered by their families to fetish priests as trokosi, or Wives of the Gods.

2) Hardboiled and Hard Luck by Banana Yoshimoto.
This is another one that I found over at Eva's blog.

Eva has been participating in the Novella Challenge and this she read this book as one of her choices. It contains two novellas which have a ghostly feel to them.

Here is the blurb from Book List.
In her seventh book of spare, piercing fiction, Japanese writer Yoshimoto once again portrays strong-minded young women coping with heartbreak, traumatic family fissures, drastic illness, and fatalities. This sounds grim, but Yoshimoto is tenderly ironic and keenly attuned to nature's beauty and the mystic dimension of life, and her characters' ability to tough their way through painful predicaments infuses her elegantly insightful stories with hope. Here two novellas portray two self-possessed yet besieged young women. In "Hardboiled," the narrator is on a solo journey that begins as a simple mountain trek and turns into an intense confrontation with otherworldly forces, including a ghost in a hotel and overwhelming memories of a lost lover and her terrible demise. In "Hard Luck," a tale all the more poignant in the wake of Terry Shiavo, the narrator's sister lies in a coma as her family struggles to find a way to say good-bye. 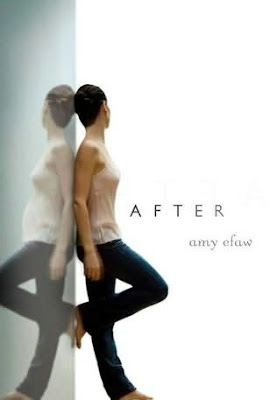 3) After by Amy Efaw
I found this one over at Alyce's blog At Home With Books.

This comes across as a harrowing look at unwanted teenage pregnancy and is written in the present tense, so you get a sense of immediacy.
Here is the blurb from Fantastic Fiction.
An infant left in the trash to die. A teenage mother who never knew she was pregnant . . .Before That Morning, these were the words most often used to describe straight-A student and star soccer player Devon Davenport: responsible, hardworking, mature. But all that changes when the police find Devon home sick from school as they investigate the case of an abandoned baby. Soon the connection is made - Devon has just given birth; the baby in the trash is hers. After That Morning, there's only one way to define Devon: attempted murderer.And yet gifted author Amy Efaw does the impossible - she turns Devon into an empathetic character, a girl who was in such deep denial that she refused to believe she was pregnant. Through airtight writing and fast-paced, gripping storytelling, Ms. Efaw takes the reader on Devon's unforgettable journey toward clarity, acceptance, and redemption. 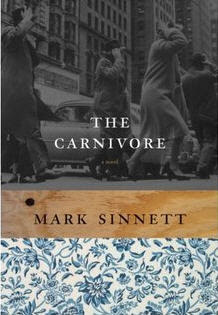 4) The Carnivore by Mark Sinnet

I found this one yesterday over at Nicole's blog 'Linus's Blanket'.

The reason I was attracted to this book is that it deals with the events surrounding a hurricane in 1954 and it looks at the consequences of the main characters actions for himself and the people surrounding him.

When Hurricane Hazel tore through Toronto on October 15, 1954, it left its mark on both the city and its inhabitants. In the aftermath, a young cop named Ray Townes emerges as a hero—numerous accounts detail the way he battled the raging Humber River to save those trapped in their homes—and his story is featured prominently in the newspapers, thrusting him into the spotlight as a local celebrity. Meanwhile, his wife Mary is wrestling with doubts about her husband’s heroism. While performing her own miracles the night of the storm as a nurse at a mud-filled, overcrowded emergency room, Mary met a woman—disoriented and near death—with a disturbingly peculiar recollection of events. While Mary tries to shake her suspicions about Ray as they rebuild their life in the shell-shocked city, she can't help but wonder about her husband and that fateful night. When a reporter comes knocking 50 years later to revisit that horrendous night, the truth begins to surface and threatens to destroy them.