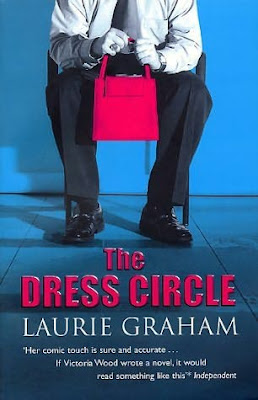 Published by Black Swan in 1998

I was lucky enough to be lent this book by my friend Fiona. She had loved it and thought I would enjoy it. I love to read books that have been recommended by others and this one was no exception.

Bob and Barbara are the main characters of the book. They are a couple in their mature years and enjoying the rewards of their business. They are surrounded by a loving family, grandchildren and friends. Everything seems positively rosy as they prepare for their daughter's wedding.

However Bob is not as settled as Barbara thought he was and Barbara starts to worry what he is keeping from her. What is his secret?

Bob has a big secret, he likes to dress in women's clothing. He has lived with this secret all his life and he can no longer live a lie. He wants to be able to wear women's clothes out in public. All hell breaks lose within the family. Barbara struggles to cope with living with Bob dressed as a woman. His children freeze him out and his friends are not sure what which to turn.

This book deals with some life changing events, yet all the characters work hard to pull through these situations and they definitely see the brighter side of life. In fact, whilst reading I felt myself humming, Monty Python's ' Always Look On The Bright Side Of Life'. This book makes you realise that you can overcome the worst things that happen in life and eventually you will move on.

Bob's cross dressing is dealt with very well, the mixed reactions from his family are completely believable. Bob's son actually punches his dad and accuses him of being a paedophile. I would imagine that this could be a common misconception for cross dressers and I find that really sad. Unfortunately society in general, finds this a difficult choice to understand and it is seen as being socially unacceptable. Bob takes the criticism well as he just wants to live his life without lies. You can only hope that eventually his son overcomes his animosity.

I loved this book. It was sad, yet so funny as well . The characters were full of hilarious eccentricities. I felt like I knew them all. They came across as characters from a very English show I used to love to watch called 'Keeping Up Appearances', which had a comical character called Hyacinth Bouquet in. The characters in the book have typically Essex traits and being a former Essex girl, I felt like I had stepped back in time to my Essex roots. I grew up surrounded by families like this, where everyone had to have the latest technology, the latest designer clothes and so forth.

This book is British humour at its best. If you enjoy watching typical British comedies such as Only Fools and Horses and The Office, you will love this. I read it in one sitting as I just couldn't put it down. I would advise that you don't read it in public places, as you end up looking really daft when you either get a fit of the giggles or tears of sadness.