Year of Wonders by Geraldine Brook 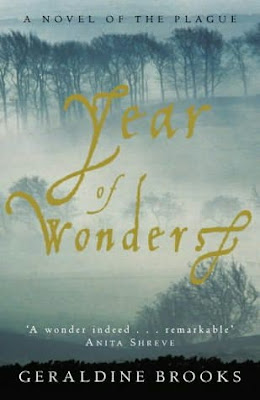 Pages - 310
Published by Harper Collins in 2002
Challenges - Fall Into Reading and A to Z Title.
This book revolves around the year of 1666, when the plague had reached a quiet little town in Derbyshire called Eyam. As the plague begins to take root within Eyam, the villagers make a difficult and extraordinary decision. The whole village decides to isolate itself completely from the rest of the world, keeping the plague contained within.
The story of their year in quarantine is told through the eyes of Anna , an eighteen year old girl already widowed and left with two children. The saying, 'What doesn't kill you makes you stronger', could have been written purely for Anna. What this young girl experiences in one year would finish the strongest person off. Anna endures watching both her own children die of the plague, as well as witnessing her family die and her close friends. Anna emerges at the end of the book with a strong will to survive and make something of her life and her self imposed exile abroad to a new life, would probably never have occurred if she had not suffered as she did. At the beginning of the book, Anna is very wary of the healing women within the town and a little afraid, yet by the end of the book she has taken on their role and has become someone to be relied on by the families who are suffering.
The characters in this book are really well written. They all stand out in my memory. Anys, the herbal women who is later accused of being a witch, really stood out. She was expected to help all the sick people, yet when they died, she was accused of cursing them and bringing on the plague. Mr Monpellion, the town's priest appeared to be a wonderful character to begin with. With the help of his wife Elinor and Anna, they attended to every person within the town who were suffering with the plague. They went from bed to bed, without taking rest for themselves. Yet by the end, Mr Monpellion revealed his true colours and they way he treated his wife was appalling. All the characters in the book show that they are not perfect and they show their failings through the book, which gives you a different opinion of their characters.
The female characters in the book are very strong and I felt that this would be an ideal read for the Women Unbound challenge. Within the book, the women take charge, during a time when it would have been frowned upon. The men often appear weak and don't help the women at all. In one scene, Anna and Elinor, go down a mine to help a young girl bring out a dish of lead, so that she can keep the mine. This is not a job for women, yet no man in the town will help them, so both women work with great effort and manage to save the mine for the girl.
This book appears to be a very detailed account of how the plague affected the country. Brooks writes beautiful prose, that shows the atmosphere of a town suffering. You get a real feel as to how the people suffered and how quickly the plague spread. The way in which each family were slowly worn down by the constant loss and suffering is constantly shown.
I enjoyed reading this book immensely, even though it was such a horrific subject to read about. I feel that I have come away from more knowledgeable about what happened during the years of the plague. Definitely a read I would recommend.