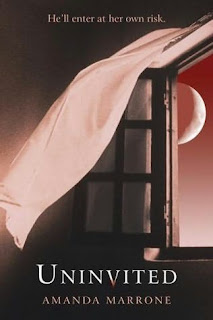 Published by Simon and Schuster in 2007

I close my eyes, hoping he won't come tonight. It's later than usual. I hope he's given up, or just gone, and I can finally sleep. Cool air blows through the window, and I marvel at my bravery. Or stupidity. It's opened just a crack, no more than an inch. But until tonight I've kept it closed, so I know he'll be wondering what it means.

I am a big fan of the Twilight series by Stephanie Meyer, which I know a lot of other book bloggers either love or hate. It is a bit like the Marmite taste effect - you either love or hate it (for any Americans reading, who have no idea what Marmite is, it is a yeast extract that you spread on toast and is similar to Vegemite). Anyway, I am a big vampire fan, so Uninvited caught my attention straight away. You only have to mention vampires or faeries and I am willing to read it.

Unfortunately this has to be the worst vampire book I have ever read. I really was so disappointed with it and I hated the way the characters were portrayed.

The lead character, Jordan, is a teenager at high school, who spends majority of the book getting wasted on either drugs or alcohol which leads to her having sex with a variety of strange young boys. The character seemed to feel that this was the way that teenagers live. It really was a horrible way to portray teenagers and I would not be happy for my girls to read this book.

Michael is the only vampire in the book, after being bitten he stalks Jordan who was previously his girlfriend. Now in previous vampire books I have read,they have always hunted in packs and stuck together, yet Michael seemed to exist on his own and knew exactly how to live and survive as a vampire without the aid of any other immortals. I found that quite unbelievable, which sounds daft when I think about it,because vampires don't exist anyway, so the whole thing is unbelievable.

This is one book I would certainly not recommend, especially as it is viewed as a Young Adult reading it. If you ever see your teenage children reading it, take it away, as it gives a degrading view of teenage life.

Has anyone else read a book marketed for teenagers and wondered how it was ever considered a Young Adult book?