6) How I Live Now by Meg Rosoff 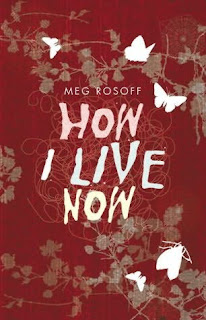 Published by Penguin Books in 2004

'The summer I went to England to stay with my cousins everything changed. Part of that was because of the war, which supposedly changed lots of things, but I can't remember much about life before the war anyway so it doesn't count in my book, which this is.'

Daisy has been shipped over from America to live with her unusual aunt and her four children who seem to run wild in the countryside. For the first few chapters, the book is lighthearted and funny, as you watch Daisy observing life on the farm. Her aunt is suddenly called away to Oslo and the children are left to play grown ups in her absence. As the days progress, Daisy feels a strong attraction to her cousin, Edmond and they try desperately to keep their feelings under control.

Then war breaks out in England and you watch as the story takes on a darker tone. The children stand back and watch as people start to panic, with food being bought in bulk and rationing begins again. The children's mother is unable to return home and contact with her is soon lost. The children then have the house taken over by the army and they are all shipped off to different parts of the country. The story then moves onto some quite tragic incidents, where the children learn very quickly that they need to grow up in order to cope with the horrific sites they witness.

How I Live Now is a portrayal of England, if war ever broke out within our country's boundaries. It is set slightly in the future and gives off a believable performance of how the British would cope with a country at war and full of terrorists. This book had the same affect on me as George Orwell's '1984'. It left chills down my spine, at the possibility of what could be. A glimpse as to how modern day Britain would cope in the event of war. It really made me wonder how all of us born after the Second World War would actually cope in this situation,as we have only ever dealt with war from a distance and from the past.

I really enjoyed reading this book, I thought the story line was fantastic. As I moved through the chapters, I felt as though I was slowly creeping down into a dark, dark cellar, as the darkness in the book gradually moved from grey to black.

I loved Daisy the main female character. She started out as your typical teenager, whose life revolves around immediate contact with the world, via text or email. You would think with the onslaught of war, that she would just crumble without Internet access, yet she learns to fight and to survive very quickly. She is left to look after Piper, her youngest cousin and takes on her maternal responsibilities with ease and actually better than some adults I know. The war makes her stronger and when she eventually reunites with Edmond, she has the strength to help him rebuild his life too.

Piper came across as an adorable child, who was loved by all. She had a great affinity with animals and was able to use her persuasive powers to get her dog, to help work on the farms. For such a young girl, she deals with her losses with dignity and grace and the war shapes her future role in life.

This book deals with some very important teenage issues, which seem to be very common these days. Daisy is slightly anorexic and her obsession with not eating at the beginning of the book, is rather disturbing. However, when food becomes scarce, Daisy realises how important it is to eat in order to keep up her strength. Sex also plays quite a big part within the story, though I did feel this was dealt with subtly if not safely.

There was a couple of tiny things that I had issues with and I really don't want to make a big deal out of them. Firstly, I struggled at first with the sexual relationship between Daisy and her cousin Edmond. Now this is something that I thought was illegal in England, but I have just found out that you can legally marry your first cousin here, however I am aware it is illegal in parts of America though. This doesn't really sit well with me, the thought of one of my girl's marrying my brother's son, just doesn't seem right. I would be interested in what you thought about this.

Secondly, I didn't like the way Daisy disappeared off to America near the end. I lost all my bearings as to what had happened and I felt concerned about who looked after Piper, when Daisy went home. It seems like Daisy was just whisked away and poor Piper was left to her own devices.

I did find her writing style a little difficult to read at the beginning, with the constant use of random capital letters for emphasis of different things. I also found punctuation to be a bit hit and miss, but I got the feeling the book had been written that way on purpose, to emphasise the voice of a teenager, who wouldn't care if she used full stops or not. Luckily, I only seemed to be dwell on the story's composition for the first couple of chapters and then I stopped noticing it, as it became more intense.

Other than these two points, I did really enjoy this book and will definitely be looking for more books by Meg Rosoff.