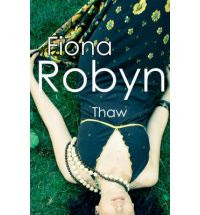 'I am trying to decide whether or not I want to carry on living. I'm giving myself three months of this journal to decide. You might think that is melodramatic, but I don't think I'm alone in wondering whether it's all worth it.

Fiona Robyn actually contacted me and asked me whether I would be interested in reading her latest book. Never one to turn down a free book, I was very interested to read it, as Fiona was not an author I was familiar with.

The book follows the life of Ruth over a thirty day period. It is written in the form of a journal where Ruth writes about her feelings and her life everyday. This journal is an unusual one, as Ruth is writing it to give herself 30 days to decide whether or not she wants to finish her own life. She is depressed and self harming herself on a regular basis, reaching the end of the line. Ruth writes about all the people that come into her life and how she feels about them and her feelings for herself.

This is a depressing story, but a good depressing story. It is really moving and thought provoking as you follow Ruth on her journey to making her decision. Ruth begins the book as someone completely alone. She lost her mother when she was young and has a difficult relationship with her father. She doesn't really have any close friends and hasn't had a serious relationship in years. At the beginning of the thirty days she is at a real low.

As the book progresses you watch Ruth gradually let people into her life. She contacts her aunt whom she hasn't seen since her mother passed; she gets herself a Russian boyfriend whom she hired to paint her portrait and she starts to make friends. I imagined Ruth as a rosebud slowly opening up and letting the sunlight and the rain in.

The book deals with self harming in a lot of detail. Ruth likes to cut herself as she finds it a release. I found this quite difficult to deal with as it something I don't really understand the reason for. I don't suffer with depression, so I can't comment on how it feels. I think this would be a good book for someone who does, so that they can see you can come back from the edge, with the help of others, if you let them in.

The only thing I didn't enjoy about the book is the ending. I found it a little ambiguous. I am presuming that Ruth made the right decision in the end, but I am not actually sure. I read the last couple of pages over a few times and I didn't think it was overly obvious and I wondered if I was missing something.

On the whole, a good read, depressing in content, but a truthful look at life.

Fiona Robyn is going to blog her novel, Thaw, starting on the 1st of March this year. To help spread the word she’s organising a Blogsplash, where blogs will publish the first page of Ruth’s diary simultaneously (and a link to the blog). I f you are interested in joining in, click on the link in brackets.