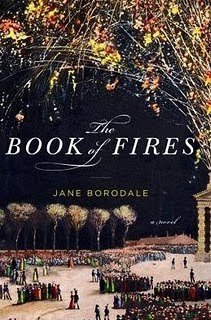 
There have been so many good books in the last couple of weeks it has been really hard to narrow them down to just four, but finally I managed it.


1) The Book Of Fires by Jane Borodale.

I found this book over at Beth Fish Reads blog. I like the fact that the story is set in Sussex where I live and the

connection with fireworks and gun powder.

A stunning historical novel, 'The Book of Fires' is the unforgettable story of Agnes Trussel -- and love, fireworks and redemption. Brought up in rural Sussex, seventeen-year-old Agnes Trussel is carrying an unwanted child. Taking advantage of the death of her elderly neighbour, Agnes steals her savings and runs away to London. On her way she encounters the intriguing Lettice Talbot who promises that she will help Agnes upon their arrival. But Agnes soon becomes lost in the dark, labyrinthine city. She ends up at the household of John Blacklock, laconic firework-maker, becoming his first female assistant. The months pass and it becomes increasingly difficult for Agnes to conceal her secret. Soon she meets Cornelius Soul, seller of gunpowder, and hatches a plan which could save her from ruin. Yet why does John Blacklock so vehemently disapprove of Mr Soul? And what exactly is he keeping from her? Could the housekeeper, Mrs Blight, with her thirst for accounts of hangings, suspect her crime or condition? 2) Flowers For Algernon by Daniel Keyes

I found this one over at Mee's blog Bookie Mee. It sounds like a really weepy one but also very good. I can't believe I have never heard of it.

This was originally written as a novella in 1959 and then extended into a novel in 1966. It was made into a film called 'Charly' in 1968 and won an Oscar.

Following his doctor's instructions, engaging simpleton Charlie Gordon tells his own story in a semi-literate "progris riports". He dimly wants to better himself but with an IQ of 68 can't even beat the laboratory mouse Algernon at maze-solving.Algernon is extra-clever thanks to an experimental brain operation so far tried only on animals. Charlie eagerly volunteers as the first human subject. After frustrating delays and agonies of concentration, the effects begin to show and the reports steadily improve: "Punctuation, is fun!" But getting smarter brings cruel shocks, as Charlie realises that his merry "friends" at the bakery where he sweeps the floor have all along been laughing at him, never with him. The IQ rise continues, taking him steadily past the human average to genius level and beyond, until he's as intellectually alone as the old, foolish Charlie ever was--and now painfully aware of it. Then, ominously, the smart mouse Algernon begins to deteriorate ... 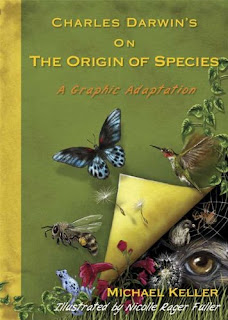 3) Charles Darwin's On The Origin of Species : A Graphic Adaption by Michael Keller.
This book has had a lot of airplay over the last few weeks and everyone seems to be reading it. Ana and Chris highly recommended it and now I can't wait to get my hands on it.
I don't think I would ever have bothered to read the original, but because this is in graphical format, it makes it more accessible.
Here is the blurb from Amazon.
A stunning graphic adaptation of one of the most famous, contested, and important books of all time.
Few books have been as controversial or as historically significant as Charles Darwin’s On the Origin of Species by Means of Natural Selection, or the Preservation of Favoured Races in the Struggle for Life. Since the moment it was released on November 24, 1859, Darwin’s masterwork has been heralded for changing the course of science and condemned for its implied challenges to religion.
In Charles Darwin’s On the Origin of Species, author Michael Keller and illustrator Nicolle Rager Fuller introduce a new generation of readers to the original text. Including sections about his pioneering research, the book’s initial public reception, his correspondence with other leading scientists, as well as the most recent breakthroughs in evolutionary theory, this riveting, beautifully rendered adaptation breathes new life into Darwin’s seminal and still polarizing work. 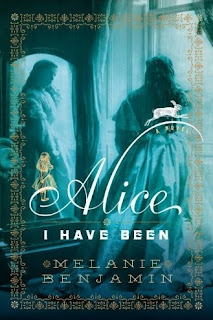 4) Alice I Have Been by Melanie Benjamin
I found this one over at Dar's blog, Peeking Between The Pages. If you are quick and live in America or Canada, you can enter Dar's competition to win this book which closes on Sunday.
Here is the blurb from Amazon.
Benjamin draws on one of the most enduring relationships in children's literature in her excellent debut, spinning out the heartbreaking story of Alice from Alice's Adventures in Wonderland. Her research into the lives of Charles Dodgson (aka Lewis Carroll) and the family of Alice Liddell is apparent as she takes circumstances shrouded in mystery and colors in the spaces to reveal a vibrant and passionate Alice. Born into a Victorian family of privilege, free-spirited Alice catches the attention of family friend Dodgson and serves as the muse for both his photography and writing. Their bond, however, is misunderstood by Alice's family, and though she is forced to sever their friendship, she is forever haunted by their connection as her life becomes something of a chain of heartbreaks. As an adult, Alice tries to escape her past, but it is only when she finally embraces it that she truly finds the happiness that eluded her. Focusing on three eras in Alice's life, Benjamin offers a finely wrought portrait of Alice that seamlessly blends fact with fiction.

So there are my finds this week. What did you find?