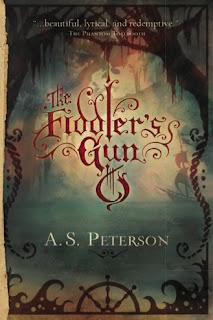 1) The Fiddler's Gun by A.S. Peterson

America is on the brink of war with England, and Fin Button is about to come undone. She’s had it with the dull life of the orphanage, and she’s ready to marry Peter and get away from rules, chores, and a life looked after by the ever-watchful Sister Hilde. But an unexpected friendship forms between Fin and the fiddle-playing cook, Bartimaeus, which sets her on a course for revolution.With Bart’s beloved fiddle and haunting blunderbuss as her only possessions, Fin discovers her first taste of freedom as a sailor aboard the Rattlesnake. She’s hiding some dark secrets, but there are bigger problems for the crew—they are on the run from the Royal Navy, and whispers of mutiny are turning the captain into a tyrant.When Fin finally returns home, will she find Peter still waiting, or will she find that she’s lost everything she once held dear? 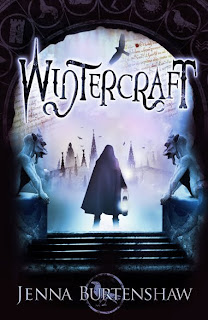 I found this one over at Ladybug's site too. She is finding some fantastic books lately.

Ten years ago Kate Winters’ parents were taken by the High Council’s wardens to help with the country’s war effort. Now the wardens are back...and prisoners, including Kate's uncle Artemis, are taken south on the terrifying Night Train. Kate and her friend Edgar are hunted by a far more dangerous enemy. Silas Dane – the High Council’s most feared man – recognises Kate as one of the Skilled; a rare group of people able to see through the veil between the living and the dead. His spirit was damaged by the High Council’s experiments into the veil, and he’s convinced that Kate can undo the damage and allow him to find peace.The knowledge Kate needs lies within Wintercraft – a book thought to be hidden deep beneath the graveyard city of Fume. But the Night of Souls, when the veil between life and death is at its thinnest, is just days away and the High Council have their own sinister plans for Kate and Wintercraft. 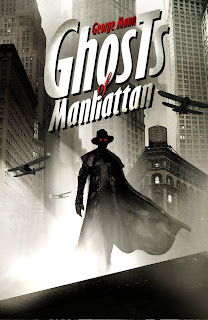 3) Ghosts of Manhattan by George Mann

I found this one at Book Chick City and fell in love with the US cover of this steam punk novel.

1926. New York. The Roaring Twenties. Jazz. Flappers. Prohibition. Coal-powered cars. A cold war with a British Empire that still covers half of the globe. Yet things have developed differently to established history. America is in the midst of a cold war with a British Empire that has only just buried Queen Victoria, her life artificially preserved to the age of 107. Coal-powered cars roar along roads thick with pedestrians, biplanes take off from standing with primitive rocket boosters and monsters lurk behind closed doors and around every corner. This is a time in need of heroes. It is a time for The Ghost. A series of targeted murders are occurring all over the city, the victims found with ancient Roman coins placed on their eyelids after death. The trail appears to lead to a group of Italian-American gangsters and their boss, who the mobsters have dubbed 'The Roman'. However, as The Ghost soon discovers, there is more to The Roman than at first appears, and more bizarre happenings that he soon links to the man, including moss-golems posing as mobsters and a plot to bring an ancient pagan god into the physical world in a cavern beneath the city. As The Ghost draws nearer to The Roman and the center of his dangerous web, he must battle with foes both physical and supernatural and call on help from the most unexpected of quarters if he is to stop The Roman and halt the imminent destruction of the city. 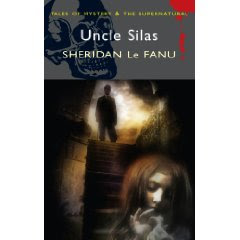 I found this one over at Nymeth's blog Things Mean ALot.

In Uncle Silas, Sheridan Le Fanu's most celebrated novel, Maud Ruthyn, the young, naive heroine, is plagued by Madame de la Rougierre from the moment the enigmatic older woman is hired as her governess. A liar, bully, and spy, when Madame leaves the house, she takes her dark secret with her. Later in the book,once again, she encounters Madame, whose sinister role in Maud's destiny becomes all too clear.With its subversion of reality and illusion, and its exploration of fear through the use of mystery and the supernatural, Uncle Silas shuns the conventions of traditional horror and delivers a chilling psychological thriller.

They are my finds this week. What did you find?