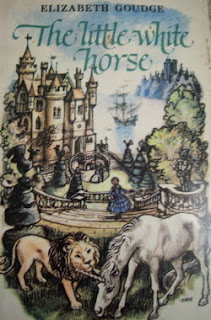 Pages - 238
First published in 1946
Challenges - Flashback Challenge
The carriage gave another lurch, and Maria Merryweather, Miss Heliotrope, and Wiggins once more fell into each other's arms, sighed, gasped, righted themselves, and fixed their attention upon those objects which were for each of them at this trying moment the source of courage and strength.
This is a book from my childhood which I have always adored and over the years I have returned to it many times. It is one of those books where I can distinctly remember my first read of it, during secondary school. I remember writing a book report about it and desperately having to reread it.
Many of you may not recognise it's original title, but may have read it or seen the movie version, which goes under either the title of 'Moonacre' or 'The Adventures in Moonacre'. I can see no reason for the name change as I have always preferred to refer to it as 'The Little White Horse'.
After the death of her absent father, Maria Merryweather and her governess are sent to live with her uncle Sir Benjamin at Moonacre Manor. Maria is frightened of her new destiny before arrival, but soon settles into her new home that has a magical air to it. She quickly falls in love with her uncle and his unusual dog, Wolf, who resembles a lion rather than a dog. The more Maria discovers about her new home and surroundings, the more she becomes embroiled in the story of the disappearance of the first Moon Princess. There has been anger and fighting within the valley for years and Maria set out to restore peace and harmony to the whole of the Moonacre valley.
It had been a few years since I last read this book and I did read it with a heightened critical eye. I found the reason I love this book so much, is because of the rich descriptions provided by the author. I could feel myself stepping into the grounds of Moonacre and feeling the crisp wet grass beneath my feet. Everything is described with such detail, leaving all your senses on full alert.
The characters within the book are unusual and very lovable. Marmaduke Scarlet, the dwarf like cook responsible for cooking such wonderful meals in abundance without breaking out in a sweat. Minette Loveday, who lays out Maria's clothes whilst she sleeps, yet no one knows she exists. They are all so wonderfully written and easy to visualise. There is much conflict between many of characters, which Maria calms with her unflappable attitude and need for peace. Maria is a strong character and she stands up to the bad people with an abundance of bravery.
My only complaint about this book, that perhaps had not been so evident to me before, was the way some of the conflicting relationships were dealt with so quickly at the end. What relationship which has led from anger to hatred, resulting in dismissing the other one's existence, could possibly be resolved in a matter of a paragraph. That did irk me a little as I was expecting a few fireworks before the resolution and I had forgotten things had been dealt with so quickly.
However, that is a minor point and I don't want it to spoil my love of such a beautiful and magical book. If you have not read it, then I would highly recommend it, allowing yourself to delicately step into the magical world of Moonacre. I love this book, despite it's flaw and I will continue to love it all my life.