I have been really good at not buying books recently, I think. Well, no actually, I haven't been good have I, as I have been sneaking my purchases in quietly into my Sunday Salon posts, so you wouldn't really notice them.

Well I went mad this week due to feeling rather down as I have felt a bit poorly. I always seem to buy books when I feel poorly. In my defense as always, these books were all from charity shops and a couple were even given to me, so they weren't expensive (just in case, hubby is reading this!)

So here are my purchases, which required two photos instead of one, as there were so many. 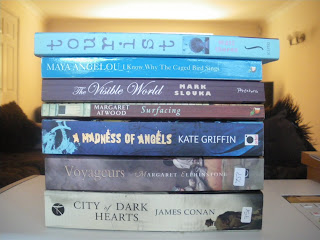 1) Tourist by Matt Thorne - This was the author's first novel at the tender age of 22 and is actually signed in the front by him. It is set in an English seaside resort, where the main character wants to convert an abandoned pier into a futuristic nightclub.

2) I Know Why The Caged Bird Sings by Maya Angelou - I picked this one up for my American Literary challenge. I know she is from Missouri and it will be ages before I get to the M's, but I thought it might be good to start searching out books I might need. This book is one of her autobiographies and focuses on the first seventeen years of her life and brought her international recognition.

3) The Visible World by Mark Slouka - this is the story of a son who makes a journey to his parent's homeland in Prague, to try and piece together his parent's past.

4) Surfacing by Margaret Atwood - a young woman returns to northern Quebec to the remote island of her childhood, to investigate the mysterious disappearance of her father.

5) A Madness of Angels by Kate Griffin - enter a London where magic exists.

6) Voyageurs by Margaret Elphinstone - set in the early 1800's, a young Quaker goes missing in the Canadian wilderness. Unable to accept her disappearance, her brother leaves England determined to find her.

7) City of Dark Hearts by James Conan - In 1893, a young New Yorker goes missing in America's most dangerous city: Chicago. Home to the World Fair, Chicago is a city of glitz and razzmatazz; a lethal place for the weak and vulnerable and the young woman is not the first to go missing. 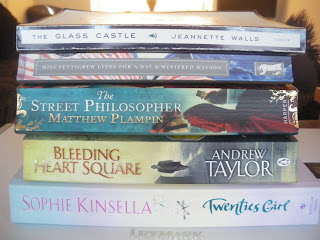 8) The Glass House by Jeanette Walls - a memoir of a young girl's family unusual family.

9) Miss Pettigrew Lives For a Day by Winifred Watson. Another Persephone find! I love the person who lives in my town, who keeps buying the Persephone books and then giving them to the charity shops, I could kiss her feet. I have the film on Sky+ waiting to be watched, but I hope to read this first.

10)The Street Philosopher by Matthew Plampin - another thriller set in 1800's.


The next two books were kindly given to me by my scrapping pal Jo.

12) Twenties Girl by Sophie Kinsella. Now I wouldn't normally be interested in Sophie Kinsella, but this one has a paranormal storyline, which is always of interest to me.

What a fabulous haul this week, quite a few Victorian Gothic style novels and a few with settings in America and a couple with disappearing people. What did you get this week.