I know we are now heading into the middle of February, but it has taken me until now to finish my Christmas journal. So here it is, the last few pages and the album. 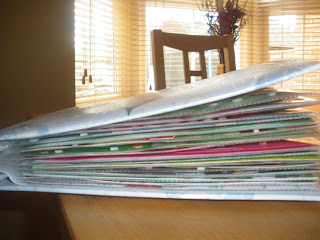 As you can see from the picture above, the album is jam packed with pages. It is really a lovely feeling when you actually finish an album. My only problem now is that I have to go back and finish 2008 album. Aargghh! Day 29 - Hubby's sister and her partner came to visit us for the day. It was fabulous. We had a lot of fun and Mick,(bless him) is game for anything and let the girls paint his nails red and do his hair. I have photographic evidence for future blackmail possibilities. 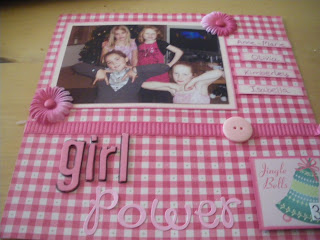 Day 30 - On this day, the lovely family we met on holiday came to visit us. They have two girls of similar age to our two, so they all got on like a house on fire. They have booked to go back to to the same hotel as us, at the same time this year, so it will be nice to see them all again.

Unfortunately I can't show New Year's Eve and New Years Day. Not because the pictures were so bad, after so much alcohol consumption, but because I know my lovely close friends don't want to be internet famous, so I have omitted the pictures, as it was too difficult to cover names and pictures. We had a fabulous night with them at our house on New Years Eve, followed by New Years Day lunch at their house. 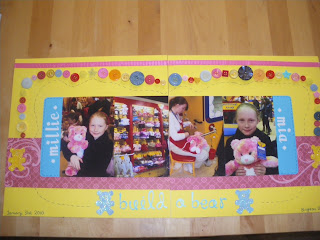 I have also managed to do a double layout this week of the girls using the pictures taken when we went to the Build a Bear Workshop. I tried to use the colours incorporated within the pictures. 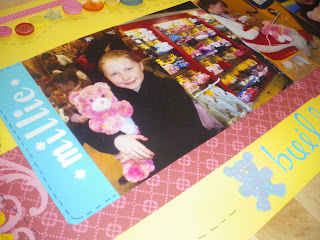 I wanted to give the impression of stitching, so I put little lines all the way around the edge. I also used about a ton of buttons around the pictures too. I thought if I use up as many as I could, I would have a good excuse to buy more at Ally Pally in April. 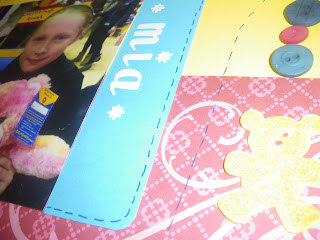 I put sparkles all over my bears, but unfortunately the photo doesn't really show them properly. You will have to take my word for it.
It feels good to be back scrapping again and I hope to have a couple of layouts to show you next week too.