White is For Witching by Helen Oyeyemi 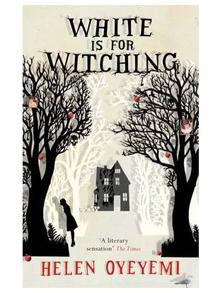 Published by Picador in 2009

Miranda Silver is in Dover, in the ground beneath her mother's house.

Her throat is blocked with a slice of apple ( to stop her speaking words that may betray her) her ears are filled with earth ( to keep her from hearing sounds that will confuse her) her eyes are closed, but her heart thrums hard like hummingbird wings.

Miranda and Eliot are twins, living in a house with a will of its own. Along with their father, they are coming to terms with the recent death of their mother. The house appears to be grieving too as well as playing tricks on the guests who stay there and the permanent inhabitants. Miranda is struggling to deal with her illness; she suffers with pica, which means she eats items that are non nutritive such as chalk and plastic. Slowly the house is taking her away from her family, just like it did with the previous women within the family going back four generations.

Hmm, I am at a loss as to what to say about this book. I don't think I really enjoyed it. I loved Oyeyemi's 'The Icarus Girl', but I found this one to be rather confusing. I felt that nothing was clear cut within the story, their was a lot of subtlety which left me at a loss as to what was happening. I actually felt that I really didn't have a clue as to what was going on for the majority of the book. I don't think it helped that I kept getting distracted whilst reading it and I think this is a book that requires your full attention at all times in order to understand what is going on. .

The book is extremely creepy and and there is a Gothic aroma to it. I wasn't always sure if events were actually happening or whether Miranda was imagining things. The house appears to be more than haunted in it, I would actually say it was possessed.

It was interesting to learn about the medical condition pica. I had heard of people eating strange things but never knew what the condition was called. It is quite a dangerous illness, as the people suffering with it could rupture the linings of their stomachs. It appears to be quite common in children, as well as pregnant women. Luckily for me, my only unusual eating habit during pregnancy, was sucking limes.

All the characters appeared to have an element of psychosis within their personalities. The relationship between Ore and Miranda is quite beautiful, but also a very dependent one. Miranda was slowly dying and held onto Ore in order to keep her alive. Ore suffered within this relationship. Miranda's relationship with Eliot, her twin, went along the psychologically connected route, often considered a possibility with twins. Personally my two have never shown any signs, but wouldn't it be fabulous if they did.

I think this is a book that really needs to be read slowly and one I may need to read again, in order to truly understand what actually occurred. All I am really aware of is that the guest house is not one I would wish to stay in, in the foreseeable future.