The Book Of Tomorrow by Cecelia Ahern 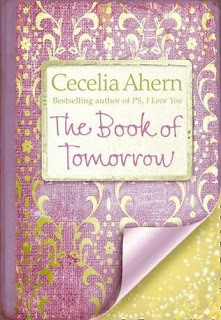 Published in 2009 by Harper Collins

Challenges - Every Month is a Holiday, Young Adult Reading Challenge and Take Another Chance Challenge.

They say a story loses something with each telling. If that is the case, this story has lost nothing, for it's the first time it's been told.

This story is one for which some people will have to suspend their disbelief. If this wasn't happening to me, I would be one of those people.

Cecelia Ahern is one of those authors that seems to change her writing style like the wind. This book was so different from The Gift, and as I understand completely different from her previous chick lit books. The Book of Tomorrow has not been marketed as a Young Adult book, but I would say without a doubt that that is what it is. It is also full to the brim with magical realism.

I picked this book up to read for a couple of reasons. Firstly I needed a book by an Irish author in order to fulfil this month's challenge for Every Month is a Holiday, as St Patrick's Day had been celebrated last week. Secondly I needed to read two books with the same word in the title for the Take a Chance Challenge. So I read this one as well as The Book Doctor which I will review tomorrow.

This book follows the life of Tamara Goodwin, who has recently lost her life of luxury. Her father commits suicide within the first page of the book and you witness Tamara and her mother have to sell off their life in order to pay off all their debts. Tamara and her mother are shipped off to live with her aunt and uncle, who are a very strange couple. Tamara hates life in the quiet little village and yearns the company of teenagers her own age. Her only happiness is the arrival of the good looking guy driving the travelling library. Whilst investigating the library Tamara comes across a large leather bound book locked with a gold clasp and padlock. When Tamara finally manages to open the book, what she discovers in there is unbelievable and shakes her world to the core.

If you are planning to read this then I would stop here and skip the next paragraph, as here comes the spoiler alert.

The book is one that I think if we had one, we would have a love/hate relationship with it. The book is a diary which tells Tamara what will happen the next day in her life. Tamara has to make a decision whether to let the day pan out as described or change the events before they happen. I cannot help but wonder what it would be like to have a glimpse into the future and know what would happen before it occurs.

I found this to be quite an enjoyable book and definitely a page turner once I got a little way into it. It is a bit of a slower burner, which improves with each chapter. I wasn't keen on the main character Tamara to begin with, as she was basically a spoilt brat and a bit of a tart, who really needed some guidance from her parents. I am not so sure she improved as the book went on, but she did manage to solve all the mysteries within the book.

I did find the ending a little annoying as there were definitely some loose ends that I imagine were missed in editing, as Aherne is not an author to write a series of books and the ending was definitely the end of the story. The things I felt that were left unanswered included where this magical book had come from in the beginning, it's existence was never questioned and the character never tried to work out where it had come from. Also within the book, there is a fire and a dead body, the real identity of this dead body is never mentioned, so you are left wondering who it might be. Lastly, the family who owned the castle seemed to disappear into the thin air, the children were still around, but one minute their parents are there and the next they are not. It's magic!! I think it might need just a little editing before the paperback version, in order to fix the loose ends.

Other than that, it was an enjoyable read, it also felt like an original storyline to me, as I haven't read anything like it before, but do let me know if you have read about any magical books like this one. It was quite a cosy read and one that had me completely absorbed. I just would like to see the loose ends tied up to make the story a bit more believable.