The Brontes Went To Woolworths by Rachel Ferguson 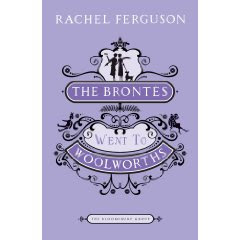 First published in 1931, repulished by The Bloomsbury Group in 2009.

How I loath that kind of novel which is about a lot of sisters. It is usually called They Were Seven, or Three Not Out, and one spends one's entire time trying to sort them all, and muttering,'Was it Isobel who drank, or Gertie? And which was it who ran way with the gigolo, Amy or Pauline? And which of their separated husbands was Lionel, Isobel's or Amy's.

The Carne sisters are growing up in London just before the Second World War. All three sisters cannot resist making up stories about different people. They range from stories about childhood toys to people they idolise in the public eye. The book deals with one of their imaginary friendships in great detail with Judge Toddington, to them all, he is just like one of the family. Until Deidre, the middle sister actually meets the judge's wife at a bazaar and the family begin to become acquainted with the her and her husband. The family find that they need to look closely at their desire for story telling and decide whether to continue or cast off their childhood fantasies.

This book was a little difficult to get into to begin with but after the first few chapters I absolutely loved it. The reason I had difficulties with it was because I struggled to grasp which parts of the story were fantasized and which were real. The family made up such huge whopping stories about these different characters, that I wasn't always sure whether that the people they were talking about were fictional or real. Once I could actually make a distinction, I couldn't put the book down. It became such a delightful read.

I felt that a lot of the fictional characters were developed in order to help the three girls deal with the lack of a father figure. His loss is felt throughout the book and the two older girls and their mother try and compensate for his loss by developing all these loving male figures into their lives. They find that this is especially of comfort to the younger daughter,Sheil, however it does cause difficulties when the real Judge doesn't live up to the fictional one in Sheil's eyes. By losing themselves in a fantasy world, it limits the amount of contact the outside world has on them.The fictitious world they have invented, puts up a padded barrier cushioning any blows which would normally upset and depress others.

I loved the blossoming friendship that occurs between the Judge and the family throughout the book. The Judge helps to fill a void that has long been dusty and cobwebbed within the girl's lives.

The Brontes do come into the book, but it would be so wrong of me to tell you of the part they play. You will have to read this delight yourself. This book is absolutely charming and full of humour, definitely worth a read.

This book is one of six recently brought out by The Bloomsbury Group. Each book has a delightfully pastel cover which entices you without even having to read a word. All of the books were originally written at the beginning of the twentieth century and had all fallen out of print. Bloomsbury have kindly brought them back into print to for our personal delight.

Other Reviews Of This Book