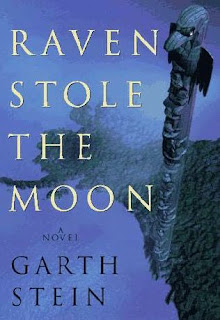 1) Raven Stole the Moon by Garth Stein - this book seems to be all over the blogging world lately. I know it has had a tour,but I saw that Chris over at Stuff As Dreams Are Made Of reviewed it and loved it and I do trust his judgement. I thought it would be an ideal read for me as it moves to my next stop on my American tour, Alaska.

Her upscale Seattle lifestyle lost meaning for Jenna Rosen when her young son drowned in Alaska. On the second anniversary of his death, she impulsively takes a ferry to Wrangell, where she grew up and which is not far from the drowning site. Once there, Jenna often feels menaced; even as a dog appears to protect her, shape-changing kushtaka (Indian spirits) repeatedly threaten her life?corporal and eternal. Her husband, Robert, arrives in Wrangell after he learns from a private investigator that she is living with a young fisherman. Only when a shaman risks his life to save Jenna and to help put their son's soul to rest are the Rosens able to resolve their grief. 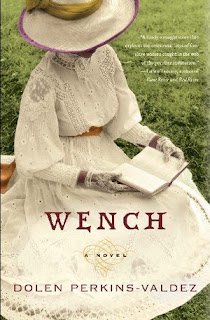 I found this one over at Diane's blog Bibliophile By The Sea. I was interested in this book after reading that it was based on a true story.

Here is the blurb from Booklist.

Four slave women accompany their masters to a resort in the free state of Ohio in the mid-1850s. Lizzie actually loves Drayle, the father of her two children—a brown-skinned boy named for his father and a girl white enough to pass. Reenie is the half sister of her owner, a cruel man who passes her along to the resort manager. Sweet is pregnant and has a relatively amiable relationship with her master, while Mawu is a wild red-haired woman bent on freedom from a cruel and violent owner. Frustrations mount as they consider their options, tempted to take advantage of the help offered by free blacks and a Quaker woman. But they are guilt-ridden about the prospect of leaving their children behind. The women rely on each other for support as they come together for three summers, catching up on their lives of woe and occasional joy. Drawing on research about the resort that eventually became the first black college, Wilberforce University, the novel explores the complexities of relationships in slavery and the abiding comfort of women’s friendships. 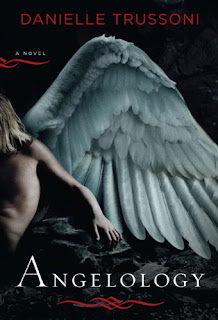 Now you know I will read anything with angels in, so this book could not pass me unnoticed.

The Nephilim were on the earth in those days Genesis 6:4 When Sister Evangeline finds mysterious correspondence between Mother Innocenta of the Saint Rose Convent and legendary philanthropist Abigail Rockefeller, it confirms Angels walked among us – and their descendants, the cruel Nephilim, still do. Indeed, the Nephilim are hunting for artefacts concealed by Abigail Rockefeller during the Second World War - objects that will ultimately allow them to enslave mankind - and have so far been prevented from reaching their apocalyptic goal by one, clandestine organisation: The Angelology Society. And if the Angelologists are to stand any chance of winning this new battle in the ages-old war, they must find the artifacts first. But their fate rests in the hands of innocent Sister Evangeline, who holds the key to unlocking Abigail Rockefeller’s hiding places … and whose own destiny may yet find her prey to the terrifying Nephilim army, with horrifying consequences for humanity. 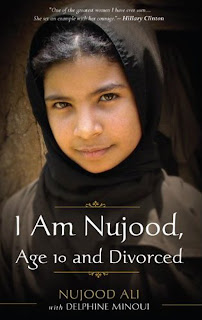 4) I am Nujood by Nujood Ali

I found this one over at Alyce's blog At Home With Books. It was part of her Friday Finds last week.

Here is a the blurb from Amazon.

Chosen by Glamour magazine as a Woman of the Year in 2008, Nujood of Yemen has become an international hero for her astonishingly brave resistance to child marriage. Sold off by her impoverished family at the age of 10, continually raped by her husband before she even reached puberty, Nujood found the courage to run away, and with the help of an activist lawyer, sympathetic judges, and the international press, she divorced her husband and returned home. Her clear, first-person narrative, translated from the French and written with Minoui, is spellbinding: the horror of her parents’ betrayal and her mother-in-law’s connivance, the “grown-ups” who send the child from classroom and toys to nightmare abuse. She never denies the poverty that drives her parents and oppresses her brothers, even as she reveals their cruelty. Unlike her passive mother, she is an activist, thrilled to return to school, determined to save others, including her little sister. True to the child’s viewpoint, the “grown-up” cruelty is devastating. Readers will find it incredible that such unbelievable abuse and such courageous resistance are happening now

That's my Friday Finds, what wonderful books did you find lately?