I hope this post finds you well and rested on this glorious Sunday morning. I have had a really busy week as the children have been off school, but they go back tomorrow, so I will hopefully get some time to myself again.

I have managed to read more books this week than of recent weeks, but I am beginning to find the books I pick a little coincidental. On Monday, I began reading Surviving The Volcano and what happens on Wednesday, an Icelandic volcano erupts bringing every airport in England to a standstill all weekend. You may just brush this off, but when I decided to read The Catcher in the Rye, J. D. Salinger then sadly passed away the day before I published my review. I am wondering if my choice of books may be more than coincidence!

I suppose by reading about volcanoes, it has made me more knowledgeable,as now I actually know what they are talking about when they mention things like 'pyroclastic flows' and 'magma'. I have to admit being glued to the television when reports about the eruption are aired, I can't help but find the whole process of how a volcano erupts fascinating. Anyway I hope to finish Surviving the Volcano later today as I plan to review it this week to help celebrate Earth Week which starts tomorrow. I was a bit naughty yesterday, as usually I only read two books at a time, but something made me pick up The Onion Girl by Charles De Lint and now I can't put it down. 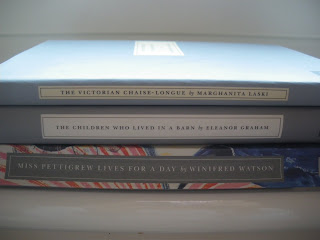 I just wanted to tell you about Persephone Week which begins on the 3rd of May and runs through to the 9th of May. It is being organised by Claire over at Paperback Reader and it is worth joining in the fun if you happen to have a couple of Persephone books in your possession. I have three books that I am planning to read for Persephone Week and I hope that I manage to read all three. Claire is also running an Angela Carter month through April, so if you have any Angela Carter books you have been meaning to read then this is the time to get them out and dust them off before April moves into May. 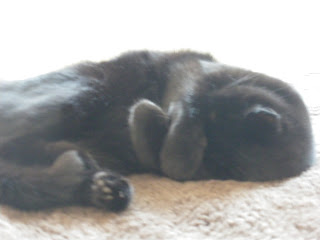 Couldn't resist sharing a couple of pictures of my reading companion, George. If this cat could be with me all the time, he would. Whenever I sit down to read he is there, he knows when I sit down and comes running from upstairs. Hubby says he is like my shadow and if I had a baby pouch, he would probably sit in it.Poor George, has some issues though, he is definitely the original scaredy cat. He is actually afraid of his own shadow and I am not joking. Here he is covering his face, as he tries to sleep. 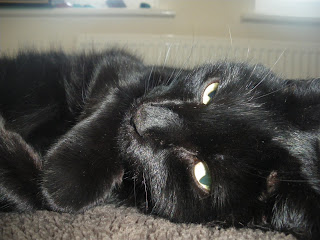 He eventually realised I was taking pictures of him and gave me a look of disgust.
I probably won't get much reading done today until this evening, as with the kids back at school tomorrow, I seem to have a list of jobs that require my attention. My blog may be review heavy this week, as I have a pile waiting to be discussed.
I hope you have a great day.