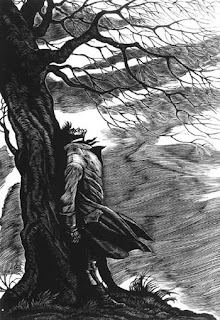 This is week 3 of Softdrinks's Wuthering Heights read a long which you will find here. This week we needed to read three more chapters starting at Chapter 7. Other people joining in with the readalong are as follows:

This week the story seemed to hot up a little bit for me, making me even more desperate to continue reading and having to try a little self control and hold back a bit.

Chapter 7 brought the return of Catherine to Wuthering Heights after the dog bite kept her as a temporary invalid and convalescing at the Earnshaws. When Cathy returns she presents a more demure side to her personality. It appears that the Earnshaws have given her a lobotomy during her visit, as she is unrecognisable in her behaviour, leaving Heathcliff ashamed of his appearance and manner. I could not help but feel sorry for Heathcliff whilst reading this chapter. He had gone from being a loved member of the family to being treated no better than the farm animals. His appearance followed step by step with his feelings of depression. The following passage best describes the way he appeared to himself and others.

'His childhood's sense of superiority, instilled into him by the favours of old Mr Earnshaw, was faded away. He struggled long to keep up an equality with Catherine in her studies, and yielded wih poignant though silent regret: but he yielded completely; and here no prevailing on him to take a step in the way of moving upward, when he found he must, necessarily, sink beneath his former level. Then personal appearance sympathised with mental deterioration: he acquired a slouching gait, and ignoble look; his naturally reserved disposition was exaggerated into an almost idiotic excess of unsociable moroseness; and he took a grim pleasure, apparently, in exciting the aversion rather than the esteem of his few acquaintance.

During the Christmas celebration which found Heathcliff banished, Heathcliff took an instant dislike to Earnshaw and expressed his distaste physically, causing Heathcliff to be beaten by Hindley. Poor Heathcliff!

Chapter 8 finds us joyous at the birth of Hareton, who we met earlier in the book as an adult and living with Heathcliff. Unfortunately our joy is short lived when his mother dies of consumption, sending her husband Hindley to drink and disorder. He cannot cope with the loss of his wife and leaves his son in the hands of the narrator, Mrs Dean, to nurture his childhood. In this chapter we also see Catherine reveal her true colours after her stay with the Earnshaws. Catherine reveals to Edgar Earnshaw how volatile she is by hitting him. Strangely, this draws him closer to her. Some people never learn,do they?

Chapter 9 brings a rather nasty incident, where Hindley returns blind drunk and begins a row with his young son, whom he decides to hold over the banisters and actually drop. Luckily for Hareton, Heathcliff was underneath to catch him and save his life, but the child is completely distraught. I can't imagine he ever loved his father after this. Also in this chapter, Cathy reveals to Mrs Dean that Edgar has proposed, Cathy measures her feelings for Edgar against her feelings for Heathcliff. Heathcliff misinterprets her words and thinking that Cathy does not love him, leaves Wuthering Heights at speed and does not return.

I really do think that Emily Bronte should have given her characters different names. I keep getting confused with all the names beginning with 'H'. It would definitely have made the story easier to follow and the characters would have been easier to identify.

I really don't like Hindley at all, especially after nearly killing his son. I am almost glad to think that Heathcliff will eventually get all Hindley's money, as he deserves to lose it after such violence and cruelty. Catherine doesn't really come across as nice either. I had hoped she would turn out better after being such a naughty child, but alas no, she has only learnt to hide her talents for nastiness, only to be revealed when the whim takes her.

During Chapter 7, we see a brief return of Lockwood, but thankfully,it is brief. I still just don't like him. In fact I don't particularly like any of the characters, yet I am compelled to continue reading. Normally my dislike would make me disinterested in a book, but within this book I just can't wait to read what happens.

Near the end of Chapter 9, Joseph decides to speak and I have to admit, I didn't understand a word he was saying. The language was impossible for me to decipher and I am a Brit, used to such strange dialects.

I am still really enjoying this book, but I don't know how much longer I can hold out just reading three chapters a week. Aargh!