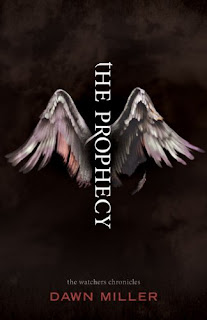 1) The Prophecy by Dawn Miller
I found this book over at a new blog to me, The Little Bookworm and couldn't resist. You know me and angels!

In this intense, emotionally charged supernatural thriller for young adults by author Dawn Miller, the angelic forces of heaven and hell wage battle over mankind, placing five gifted teenagers in the middle of a war only they can end. Each of the five has struggled since a terrifying night in their childhood, and as memories of that evening's events come rushing back, and the dark angels make themselves known, they discover that what was meant to destroy them has instead opened their eyes to a world otherwise hidden from humankind.

2) The Moorchild by Eloise McGraw
I can't seem to find this book on Google Reader, so I can't actually remember where I found it. If you reviewed this book this week, let me know and I will add a link.
Here is the blurb from Amazon.
An extraordinary tale of a girl who is half folk/half human and never quite fits into either realm. The magical Moorfolk reject Saska and secretly exchange her for a perfect human baby. Saska grows up loved by her human parents but harassed by the other villagers. She escapes to the moors where she learns of her history and sets out to rescue the stolen human child.

3) Little Children by Tom Perrotta.
Amanda from The Zen Leaf reviewed this book last week and I fell in love with it.
Here is the blurb from Amazon.
The characters in this intelligent, absorbing tale of suburban angst are constrained and defined by their relationship to children. There's Sarah, an erstwhile bisexual feminist who finds herself an unhappy mother and wife to a branding consultant addicted to Internet porn. There's Todd, a handsome ex-jock and stay-at-home dad known to neighborhood housewives as the Prom King, who finds in house-husbandry and reveries about his teenage glory days a comforting alternative to his wife's demands that he pass the bar and get on with a law career. There's Mary Ann, an uptight supermom who schedules sex with her husband every Tuesday at nine and already has her well-drilled four-year-old on the inside track to Harvard. And there's Ronnie, a pedophile whose return from prison throws the school district into an uproar, and his mother, May, who still harbors hopes that her son will turn out well after all. In the midst of this universe of mild to fulminating family dysfunction, Sarah and Todd drift into an affair that recaptures the passion of adolescence, that fleeting period of freedom and possibility between the dutiful rigidities of childhood and parenthood.

4) Birthmarked by Caragh M. O'Brien
I found this one over at The Little Bookworm too.
Here is the blurb from Amazon.
It’s been 300 years since Lake Michigan became Unlake Michigan; the “cool age” is only hazily known to residents of Wharfton, a small village that sits alongside the walled city of the Enclave. Gaia is 16 and works in Western Sector Three with her mother delivering babies, “advancing” the first three per month to live a better life inside the city. It’s a wrenching routine Gaia doesn’t question until her parents are mysteriously arrested by Enclave authorities. Gaia’s rescue attempt is fraught with peril—the burn scar on her face marks her as a “freak” who would never be allowed into the Enclave’s exclusive gene pool—and soon she herself is tossed into a cell with other female physicians.

What did you find this week?