Learning to Play the Steel Drums

I couldn't resist sharing some photos with you of my adventures in steel band land! Our local secondary school has the most amazing senior steel band. The band are well known in the county and everyone I know loves to go and watch them and support them. They are so good you cannot help but get up and dance along to the music. They make it look so easy, that you cannot help but believe you could easily play it too.

Last Saturday, they opened the doors to the general public and let us loose with the steel drums. There was a session for children in the morning, which both my girls attended. Then in the afternoon they allowed the adults in. 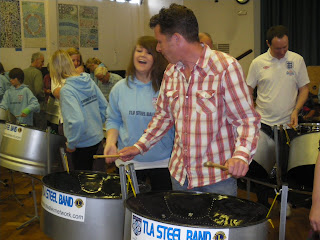 Here is hubby trying his hand at the guitar steel drums. Each set of drums represented a different set of instruments. The band made it look so easy, but we were in for a big surprise. I have absolutely no musical talent at all, yet I was convinced that I would be able to play a steel drum by the end of the day. Ha ha ha! 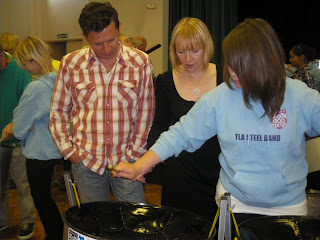 The leader of the band had decided to teach us all how to play Feeling Hot, Hot, Hot. There was no music to follow, we were just expected to follow the notes the band told us. I didn't have a clue what I was doing and knew I needed it written down in order to understand it, so a lovely young boy wrote the notes down for me to follow. 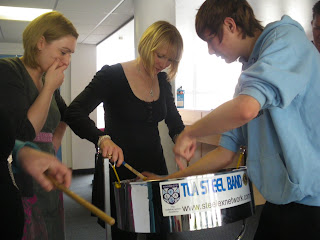 I had managed to convince quite a few of my friends that they really should come and join the fun too. Here is Anne from Pretty, laughing at my lame attempts to play the first few notes of the song. By the time I had actually mastered the notes,playing on the timber steel drum (could not cope with the other drums as you had to play two drums at a time!) I thought I was doing really well, then I was asked to play at speed with the other drummers. I completely lost the plot and was unable to play the notes that fast. 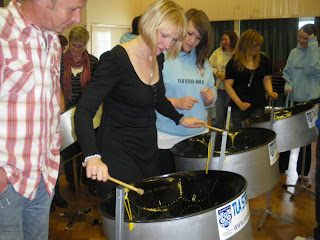 This was an attempt at playing two drums at once. I just couldn't keep both eyes on what both hands were doing.

The day was a complete blast and I haven't laughed so much in years. When we attempted to play the song together, it was an absolute shambles and the poor band leader went home with a headache.
We may not be as talented as the real band players, but we had a huge amount of fun attempting to play.
If you ever get the chance to play the steel drums, even if you are in no way musical, then you must have a go. You might not get the tune right, but I can guarantee you will have a great time trying.
Will I join an adult steel band? Hmmm, I don't think so, perhaps a samba band would be more suitable. Now where is that Yellow Pages directory,so I can find one!