Monday Mailbox - last for a while I promise! 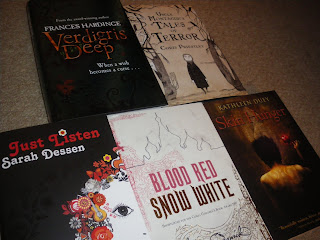 This is the last parcel of books that I have been waiting for, which came out of my birthday money. That is it for me for a long while now. I don't plan to buy anymore books unless they are ones I am desperately waiting for.

These books came from Red House books and they had a spring sale where you could buy five books for £12. I couldn't resist!

1) Verdigris Deep by Frances Hardinge. When Ryan and his friends are caught stranded and penniless late one night, they steal some coins from a well for their bus fare home. Soon after, strange things begin to happen. Peculiar marks tingle on Ryan’s knuckles, light bulbs mysteriously explode and a terrified Chelle starts speaking words that aren’t her own.
Then the well witch appears, with her fountains for eyes and gargled demands. From now on, the friends must serve her . . . and the wishes that lie rotting at the bottom of her well.

2) Uncle Montague's Tales of Terror by Chris Priestley - this book was read by so many people before Christmas I was desperate to read it. Uncle Montague lives alone in a big house and his regular visits from his nephew give him the opportunity to relive some of the most frightening stories he knows. But as the stories unfold, a newer and more surprising narrative emerges, one that is perhaps the most frightening of all. Uncle Montague's Tales of Terror, it transpires, are not so much works of imagination as dreadful lurking memories. Memories of an earlier time in which Uncle Montague lived a very different life to his present solitary existence.

3) Just Listen by Sarah Dessen - I haven't read any books by Sarah Dessen yet, but I really want to. I may just buy all her books for these nifty covers.Last year, Annabel was "the girl who has everything"--at least that's the part she played in the television commercial for Kopf 's Department Store.This year, she's the girl who has nothing: no best friend because mean-but-exciting Sophie dropped her, no peace at home since her older sister became anorexic, and no one to sit with at lunch. Until she meets Owen Armstrong. Tall, dark, and music-obsessed, Owen is a reformed bad boy with a commitment to truth-telling.With Owen's help,maybe Annabel can face what happened the night she and Sophie stopped being friends.

4) Blood Red, Snow White by Marcus Sedgewick. Set at the time of the Russian Revolution, the end of a centuries old dynasty, the rise of the Bolsheviks sent shockwaves around the world. This is the story of one man who was there. It's real history - about the riches and excesses, the glory of the Russian nobility, Nicholas and Alexandra, their haemophiliac son, Alexei, notorious Rasputin, Lenin and Trotsky who ruled from palaces where the Czars had once danced till dawn. The man was real too, his name was Arthur Ransome. He was a writer, accused of being a spy, perhaps even a double agent, and he left his wife and beloved daughter and fell in love with Russia and a Russian woman, Evgenia. Fictionalising history and blending it with real life.

5) Skin Hunger by Kathleen Duey. In this darkly atmospheric fantasy, the first in a planned trilogy called A Resurrection of Magic, Duey weaves together the stories of two teens who live in a world in which the working of magic has a turbulent history. When her bitter father dies, Sadima, a young woman who can communicate with animals, keeps house for two renegade magicians at a time when magic has been outlawed. Her experiences, which include learning to read and falling in love, alternate with those of Hahp, born generations after Sadima. Exiled by his wealthy, disapproving father, he attends a school of wizardry where, among other unpleasantness, students are starved to death if they can't conjure up food. The pacing in this page-turner accelerates as the stories progress and links between them emerge, moving toward a cliffhanger ending that will leave readers anxious for future installments.


Can't wait to get around to reading these lovely new books!