I have been sorely tempted by all the new books that have been appearing in the shops lately but I have tried to resist temptation. Don't think it will last long, so I thought I would show you my boot sale bargains. 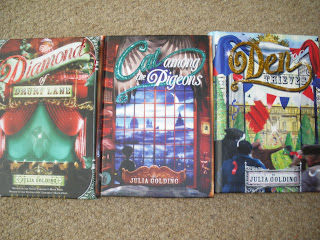 These lovely hard backed books are the first three books in the Julia Golding series set in the Theatre Royal in Drury Lane, Covent Garden in 1790.These covers are all beautiful and glittery and the books don't even look like they have been read. A bargain for £2 for the lot. 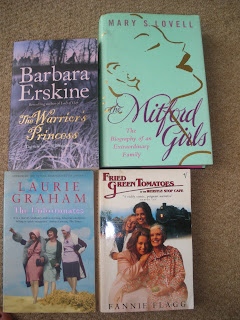 1) The Warrior's Princess by Barbara Erskine. I used to read everything that Barbara Erskine wrote and my favourite book by her is 'Midnight Is a Lonely Place'. This one came out in 2009 and is set during the Roman invasion of Britain. I love the supernatural element that always exists in her books.
2) The Mitford Girls by Mary S. Lovell. I kept hearing about the Mitford sisters and was intrigued by this biography of the family. Over here in England, they same fairly unknown, in fact I couldn't find one person who had heard of them. I know they were very popular in America, so I look forward to finding out more.
3) The Unfortunates by Laurie Graham - I was lent Graham's book 'The Dress Circle' last year and absolutely loved it, so I was pleased to find this one. This is set at the beginning of World War I when Poppy Minkel's mother is desperate for her daughter to find a husband.
4) Fried Green Tomatoes at The Whistlestop Cafe by Fannie Flagg. Yes, I know I recently read it for the second time, but I haven't ever actually owned my own copy of the book. It is one I will always read again, as it is such a beautiful story. 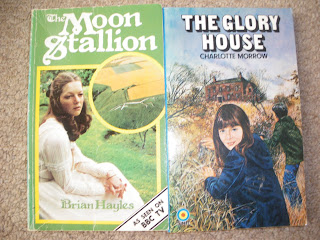 These two finds were published in the 70's and were originally priced at 25p. Remember the days when you could buy books for 25p!
5) The Moon Stallion by Brian Hayles. When the Purwells set out to explore the land of the real King Arthur, they find themselves caught up in a hunt for the Moon Stallion, a beautiful but dangerous beast without a mortal master. This was originally a TV series in the 70's but I don't actually remember it.
6) The Glory House by Charlotte Morrow. Ever since Rose first discovered the remote, long-deserted house on the gorse-covered heathland above her home, she has gained strange comfort from the dreams she weaves around it, until she encounters the real occupants of the house and with them a threat to her world of make believe.
Some fabulous books that I can't wait to read.
What did you get this week?