A spot of light gardening!

As I mentioned on Monday, the Dacosta clan have been doing a bit of light gardening. Light gardening, ha! What started as a whim on Saturday morning to cut down the tree you can see in the picture below, ended up being a complete overhaul and re landscaping of the front garden. We actually had an audience by the end of it, and people were coming up and congratulating us on how hard we had worked all weekend. 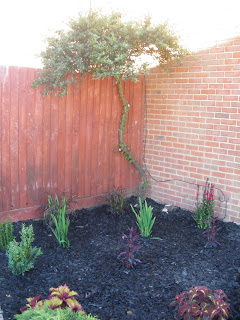 The tree climbing up the fence had basically taken over half the front garden and was encroaching on our window in the picture below. It had been allowed to take over and hadn't been chopped back in years. There was I with my secateurs, thinking I will easily cut it back - it ended up with hubby having to buy an electric chainsaw to cut the branches which were as wide as the top of my arm. I wanted to pull the whole thing down, but as hubby now has his chainsaw, we can keep an eye on it. So we spent all day Saturday pulling the whole front garden up, with the aid of my kids too. It took three trips to the dump and a very humpy hubby as his car which is his pride and joy was full of mud and bugs! I kept telling him to stop being such a woose! 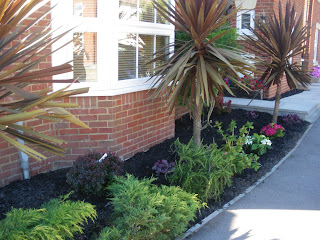 The big spiky trees were left in the garden, much to my disgust. How we haven't had an insurance claim from someone claiming to lose an eye, I will never know.
On Sunday, we went to the garden centre and piled up the car with new plants. Apart from my indulgence, hydrangeas, which I love and are pictured below, the rest of the garden took on a red and white look. I bought a few different plants with red leaves and many with red and white flowers which should come out before summer. Hubby then put down black bark to hopefully discourage the weeds from returning. I am really pleased with my new front garden and I am actually watering it, which really is a first for me. If plants could talk, my old front garden would have been wailing with thirst. 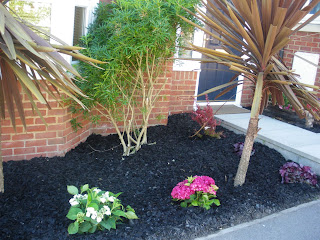 By the end of the weekend, hubby and I were exhausted. Both of us had back ache and sore knees. I had over twenty splinters in my hands from cutting the bushes the previous day. The back garden now needs doing, but I imagine it will be next year, before I venture out there. Let's not rush, folks.

Email ThisBlogThis!Share to TwitterShare to FacebookShare to Pinterest
Labels: gardening