Happy Christmas week to you all. I hope the run up the festive season is treating y﻿ou a little better than us.  We have had an igloo for a house all weekend as our boiler packed up on the weekend, leaving us without any heat.  Luckily we did have some electric heaters, a fire and immersion heater for the water, but it is terrible what you get used to.  I am so thankful for central heating and feel for anyone who doesn't have it. It made me feel very appreciative of what I have.  I wasn't even upset when the ceiling in the dining room started to crack due to a leaky pipe in the bathroom. Normally that would have really upset me, but the house finally being warm, had me happy as Larry.
We have had a busy weekend. We took the girls ice skating on Saturday which was lovely and then went to the pantomime yesterday.  Hubby had to miss the pantomime in order to stay at home and make sure our pipes didn't freeze and burst, so I felt rather bad going without him.
I had great plans for this week on my blog, but I think I am going to have to play this week by ear.  I have yet to buy food for Christmas, or to do the baking I had planned. Presents are still to be wrapped and the girls are supposed to be having a sleepover tomorrow, as well as family staying over Christmas. Don't even ask me about my Christmas journal, as I may snarl with anger!!!
I did manage to get to the library to pick up some festive books for the season.  If I get to read them I will be impressed, if not they will make lovely coffee table additions over the Christmas period. 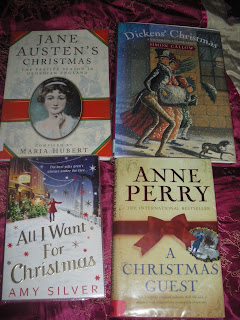 1) Jane Austen's Christmas by Maria Hubert - this book gives you an insight into what Christmas would have been like for Jane and has details from family letters in it, describing their Christmas past times.
2)  Dicken's Christmas by Simon Callow - this is written by the actor who you may remember being the only one to die in Four Weddings and a Funeral.  This is an account of Christmas in Dicken's time and also has A Christmas Carol in it.
3) A Christmas Guest by Anne Perry - this is a Victorian crime novella and is brilliant. It reminds a little of the Agatha Christie style murders.
4) All I Want For Christmas by Amy Silver - pure Chick Lit Christmas Comfort Read!﻿
I also have Comfort and Joy by India Knight, which is the funniest Christmas book I have ever read.  If you are a stressed mother during the festive season, then this book is for you. 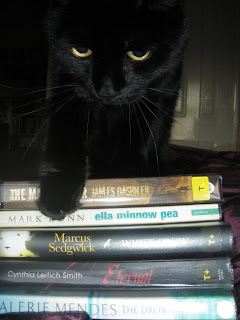 As you can see, my cat decided to help whilst I took photos of my library loot. He was determined to be in the picture. He looks like King Kong. 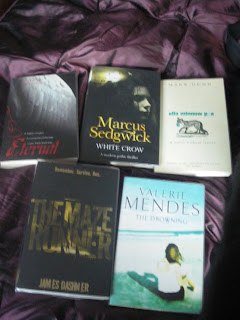 As some of you may know I am not committing myself to any challenges next year as I failed miserably. Instead I hope to devote each month to different genres and authors.  I have decided to make January my Young Adult month.  That doesn't mean that I won't read other books as well, but I hope to spend January predominantly reading Young Adult books. So I went to the library to pick up a few extra which is a bit of a joke as I have far too many unread Young Adult books on my shelves and I know I am probably getting more for Christmas!

1) Eternal by Cynthia Leitich Smith - angel YA in an alternate reality where vampires and werewolves do exist.

2) White Crow by Marcus Sedgewick - a modern gothic thriller. Clover at Fluttering Butterflies recently reviewed this and it sounded fantastic.

3) Ella Minnow Pea by Mark Dunn. I have been wanting to read this for a while since Ana reviewed it. Ella Minnow Pea is a girl living happily on the fictional island of Nollop off the coast of South Carolina. Nollop was named after Nevin Nollop, author of the immortal pangram,* “The quick brown fox jumps over the lazy dog.” Now Ella finds herself acting to save her friends, family, and fellow citizens from the encroaching totalitarianism of the island’s Council, which has banned the use of certain letters of the alphabet as they fall from a memorial statue of Nevin Nollop. As the letters progressively drop from the statue they also disappear from the novel. The result is both a hilarious and moving story of one girl’s fight for freedom of expression, as well as a linguistic tour de force sure to delight word lovers everywhere.

4) The Drowning by Valerie Mendes.Sixteen-year-old Jenna wants to dance - not just in dance class or in her bedroom, but professionally, in London, under the eyes of the best teachers in the world. But a fatal accident blows her family and Cornish life apart and, guilty and grief-stricken, she puts all her plans on hold. Until a chance meeting with someone who was there with her that tragic afternoon. Who is he, and how can he help her? Will Jenna find the courage and determination to follow her dreams?

5) The Maze Runner by James Dashner - Dystopian fiction. When the doors of the lift crank open, the only thing Thomas remembers is his first name. But he's not alone. He's surrounded by boys who welcome him to the Glade - a walled encampment at the centre of a bizarre and terrible stone maze. Like Thomas, the Gladers don't know why or how they came to be there - or what's happened to the world outside. All they know is that every morning when the walls slide back, they will risk everything - even the Grievers, half-machine, half-animal horror that patrols its corridors, to find out.


These should keep me occupied over the festive season.  I hope to show you some festive photos tomorrow.

Have a great day.