I really love this book of mystery as has brought so many new authors to my attention, who were quite legendary during the early 1900's.  This week's story is written by Algernon Blackwood, who had a variety of jobs, before he found his true vocation as an author.  He always had a preoccupation with the spiritual side of life, which must have made him really stand out during the 1800's. In fact, from what I have read he was one of the most prolific ghost writers of his time.  He is the author of 12 adult novels and 2 children's novels.

The Occupant Of The Room 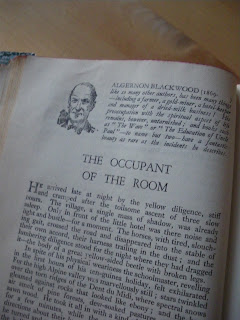 This is definitely one of my favourite tales so far.  The narrator in the story arrives very late at a hotel in the Alpines. He is distraught to find that there are no rooms available at the hotel, after forgetting to book a room before leaving.

As he sets off to find somewhere to sleep for the night, the porter of the hotel  feels sorry for him and knowing there are no more hotels in the area, comes up with a solution. He offers a room to the gentleman that is already in use, but it's occupant went up the mountains a couple of days ago and has yet to return. Desperate to sleep anywhere, the narrator takes the offer of the bed.

Once settled in the room, he becomes a little uncomfortable as the previous occupant has let her things in the room. He feels that he has to cover the wardrobe, knowing that her clothes are hanging in there still. Sleep eludes him and as the evening wears on he notices a severe change in his mood. Normally having a rather happy outlook on life, he begins to feel suicidal and becomes convinced that something has happened to the previous occupant of the room. He cannot settle until he finds out whether she is alive or not.

I am not going to tell you anymore because I don't want to spoil the story for you, but you must definitely read it.

The narrator has no name in the story, which I felt emphasised that he was not the main character in this piece.  There is a far bigger character within the few short pages.  I felt instantly involved and intrigued in the story from the first paragraph.  I wanted to know more and raced through the story, desperate for a conclusion.

The story is rather creepy, leaving me with an expectation of mist slowly surrounding me as I read.  Blackwood has a way of leaving you in suspense until the very end.

If you would like to find out what happens in the story yourself, then please read it here.

Algernon Blackwood wrote quite a lot  of short stories during his writing career. Have you read any of them? Which ones would you recommend?