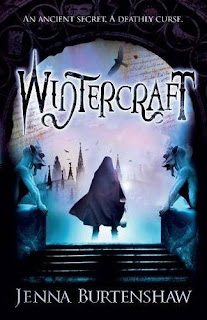 Published in 2010 by Headline Publishing Group

At the southern edge of a moonlit city, a woman stood over an open grave. The blue edge of a tower's long shadow sliced across the ground beside her feet and the grave yawned like an open throat, its headstone cracked in two, leaving only a broken piece of stone t mark the place where the dead still lay.

From the first paragraph, you are aware that you are about to embark on a dark and dangerous journey into a Gothic world where the dead and the living are only separated by a thin 'veil'.  Kate Winters has the ability to bring life and death together and everyone wants to use her ability, stopping at nothing to get to her. Kate is thrust into a terrifying ordeal from the first few pages of the book and there is no time for her to catch a breath as she sets out to save her uncle Artemis, who has been kidnapped. She plays a constant cat and mouse game with her evil pursuers.

Jenna Burtenshaw has beautifully crafted her characters to make them not only believable but very real.  Kate is a feisty lead character, who takes on her newly acquired powers with ease, as though she had unknowingly been waiting all her life to take that role.  She is caring and thoughtful, yet brave and forthright.  I absolutely loved Kate for her braveness, she stood up to some rather frightening characters that would have found me trembling with fear.

Daru is one of  those frightening characters. Imagine a cross between Cruella De Vil from 101 Dalmations and Mrs Marisa Coulter from Northern Lights,only scarier and you would have a perfect description of  Daru. She will stop at nothing to get what she wants. She has the aroma of pure evil.

Silas is a fascinating character, who I loathed on page one and loved by the last page.  He is dark, brooding and dangerous and I look forward to making his acquaintance again in future books within the trilogy. He is neither alive nor dead and fulfills such a complicated role beautifully.

The world created for this book is original in style. Even though it is a dark fantasy there are none of the usual characters found in that genre. You won't find a fairy or a vampire lurking amongst the scenes.

Jenna Burtenshaw has created a dark and creepy setting which is brought to life by her excellent use of imagery. In the following scene, I actually felt like I could see everything that Kate viewed before her. She attacked  my senses with gusto. I could feel the pain and the fear seeping off the pages.

The Night Train stretched back endlessly down the track, no longer the grand funerary train of Albion's last age, created to carry the dead to their place of rest, but a twisted ruin of what it had once been: a symbol of terror instead of hope. Its carriage doors opened one by one, filling the air with the shriek of sliding metal, then the first cages were rolled forward and the throbbing sound of machinery echoed inside, sending many of the prisoners into a panic.

The station was in uproar. No one wanted to be put on that train and their shouts were deafening. People fought at their locks, tried to squeeze through the bars, and two cages crashed on to their sides as their occupants tried desperately to escape. The wardens ignored them and stood in silence along the platform, their daggers glinting in the lantern light . They did not care if people shouted or fought or begged or screamed. To them, Morvane was just another town and they had already won.

Jenna Burtenshaw has made a promising start to what I believe will be a wonderful trilogy. I can't wait until April 14th, when the second book is published.