The Big Break with Michelle Harrison.

The Big Break would like to welcome Michelle Harrison, winner of the Whitbread Children's Book Prize in 2009 and author of the The Thirteen Treasures series. You can read the reviews of the first two books in the series here and here. 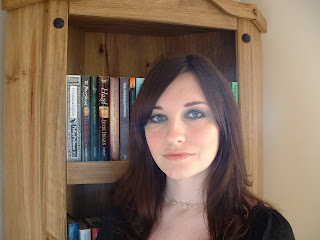 
It’s a pleasure - thank you for inviting me.

What was your first reaction when you found out that your book was to be published? How did it make you feel?

Shocked, but my overwhelming feeling was of relief. My agent had submitted the manuscript to eleven publishers and I’d been waiting on tenterhooks. Every time my agent’s emails popped up my stomach would flip and I lost half a stone in weight during that time because all I could think about was that my book was being read by actual publishers! It was a nerve-wracking time.

Three of those eleven publishers wanted to meet with me. The first gave me a cup of tea and said lots of good things, but their feeling was to take the book a little younger and cut out some of the threads. They were not keen on the idea of a sequel from the viewpoint of a different protagonist (Red) and wanted me to stick with Tanya. While I was open to revisions this seemed a huge amount of work and took it away from the book I wanted it to be.

The second publisher was Simon & Schuster, and things were different from the offset. The entire children’s team were present, and they’d laid on a spread of hot drinks, fresh juice and all sorts of nibbles including fresh strawberries! On the table was an array of their newly published titles. They were clearly trying to make an impression. They loved the idea of Red’s sequel, and within minutes had expressed their wish to publish the books. When we left, I said to my agent, ‘That seemed to go well!’

She replied, ‘It did. They’re putting in an offer for two books at the end of the week.’ After that we went to the nearest pub and celebrated with a glass of wine. We still had one publisher to see but already my strong feeling was to go with S&S because I knew they ‘got’ the book and had published other fairy books brilliantly. As it turned out, the final publisher felt the same as the first – they wanted to take the book slightly younger, which cemented my decision to go with S&S.

I was moping! Friday came, and we’d been to see the third publisher. I’d been waiting to hear whether S&S would stay true to their word (there was no reason that they shouldn’t but I’d started to go slightly mad by then and was imagining all sorts of crazy reasons why they might change their minds)! It got to about 5 o’clock and then I finally got the call from my agent to say they had officially made the offer.

I was living alone at that time – I’d just moved to Oxford and my boyfriend was still searching for a job so he could move in with me. I had no one to celebrate with except my cat! So instead I telephoned just about everyone I knew.

I rang my mum, who’s my biggest fan. Me and my sister jokingly call her ‘Stan’ after the Eminem song because she tells literally everyone she meets that her daughter is an author – even the postman!

I got the deal at the end of February 2008, and the book was published on 5th January 2009, so 11 months, which is actually very fast. Most books are published within about 18 months after being accepted for publication. They processed it more quickly as they were keen on entering it for the Waterstone’s Prize, which it then went on to win!

There were a couple of edits in which I addressed some of the observations my editors had raised. One such thing was that Fabian’s speech was deemed too sophisticated for someone of his age, so I had to age that down a bit. After that it went to the copyeditor who put the script into ‘house style’ and combed it for tiny, but crucial discrepancies in the story as well as any grammar issues.

After the text was approved it was typeset, and this was where it got really exciting. I was sent a set of proof pages and could see how the book would be laid out, and which font it was set in, etc. I then got a final chance to read through and make any final (minor) changes. Meanwhile, the page proofs were being proofread, resulting in another list of smaller comments such as repetition of words or phrase, which I then had the option to change.

Throughout this the Design team worked on ideas for the cover and sent through initial sketches, rough artwork and then final artwork. It was really exciting to see the different parts of the book starting to take shape.

The first time was on the book proof, and it felt totally magical and surreal even though it had quite a plain red cover and unfinished typography.

Where was the first place that you saw your book on sale and did you do anything crazy when you saw it? ( For instance, buy a copy, or tell the shop keeper that it was your book)

It was in WHSmith’s in Oxford, a few days before Christmas 2008. Although it wasn’t officially published for another couple of weeks some stock had started to appear. I pulled it off the shelf very carefully, stared at it, smiled, then put it back and ran out of the shop. In my head I felt really conspicuous, like everyone would know it was my book. Ridiculous, obviously!

I’m working on a stand-alone ghost story. It’s still early days and I don’t have a title yet, but I’m REALLY excited about this one. The idea has been brewing in my head for a couple of years. It’s told from a male point of view which is a first for me, and aimed at slightly older readers than the ‘13 Treasures’ books.

How did you celebrate the recent release of the third book in the series ‘The Thirteen Secrets’?

I didn’t! I just haven’t had the time. It’s been non-stop, working to promote it and trying to get on with the next book, as well as running a household and having another job. I should make more time to stop and celebrate but I’ve become a bit of a workaholic! But it’s fine – I like to keep busy.

Read as much as you can, whether it’s your chosen genre or not. Keep trying – you have to be persistent and be able to take rejections gracefully. If you don’t already have a copy of The Writers’ and Artists’ Yearbook then make it a priority to get one. It tells you everything* you need to know about getting published.

If and when you do find a publisher, be prepared to promote your work in the form of author talks, events, and if you’re a children’s or YA author – school visits!

*Except how to write a best-seller.

Thank you Michelle for coming onto the blog today. I can't wait to read your ghost story when it comes out.

If you would like to know more about Michelle Harrison then please click here to visit her blog.

All three books are available from Amazon and The Book Depository.