Life As We Know It! Atom Books Thwarts Me At Every Turn.

Just to let you know in advance, there will be no Life As We Know It post next week as Katherine Langrish, author of West of the Moon will be taking over the blog for a few days!

I am not known to be a naturally obsessive person. No, really I’m not!

I can only think of one time when I really should have calmed my compulsion.

During my immature years of adolescence my obsession with Wham! erupted and I am convinced it would have been easily nipped in the bud if restraining orders had been the height of fashion. It is wonderful that after all these years George Michael has obviously moved on from our imaginary relationship and changed his sexual orientation thus allowing me to follow him on Twitter. It shows that I have been forgiven and that we are now both grown up enough to talk like adults. (Twitter ID saved as a favourite and in constant use, albeit one way!)

I have never been obsessed with anything else and the rumours that continue to tag me about my cleaning craze were only spread by passing spectators who heard the ambulance man laughing at my confession that a little light cleaning had caused my husband’s sudden paralysis. How was I to know he would freak out at all the food tins lined up symmetrically in the cupboard so that the labels faced the front for easy identification. He thought he had stepped into a scene from ‘Sleeping With The Enemy’ (scary OCD film with Julia Roberts). So aside from this the aforementioned trivialities , I like to think of myself as an easy going, laid back kind of woman who thrives on complacency. You won’t find me being lured into spending money on the latest IPad, expensive Pandora bracelets or extremely pretty Manolo Blahnik shoes. I am usually content to enjoy the things I have.

I consider myself to be obsession free. Or at least I did!

As many of you know, I have recently discovered Twitter and it has become the bane of my life. I was lured into a false sense of security by other book bloggers. There was I imagining lots of cosy book chats as we compared recent and memorable reads. No one told me that I would be tempted by those evil bewitching magicians known as ‘The Publishers’ who parade new and exciting, yet still unreleased books under my nose, knowing I have little will power to resist.

Now I am coveting books that won’t be released for months. And what happens whilst waiting for these book releases.

My ‘must have’ button which is normally on standby has been tampered with and is now jammed permanently on play. I want one book that no one else has and I will stop at nothing to get it.

What book I hear you cry! 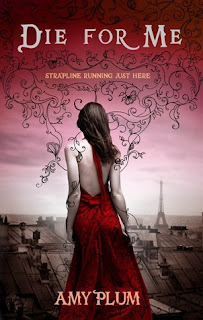 Since the cover was revealed nearly two months ago, all I have done is hanker for this book. I have spent far too much time trying to tempt the UK publishers, Atom Books, with cupcakes and fizzy sweets, but alas they have just waved down at me from their ivory Atom towers. I wouldn’t mind but I am excellent at catching, they could just throw one out of the window.

I spoke to the author, the delightful Amy Plum whom I kept amused for an entire day last week with my bartering with Atom Books. She believed I deserved a book just for my sheer perseverance alone. She is sending me some bookmarks as compensation for my efforts. Now all I need is the darn book from Atom to use them with.

I thought hard about my tactics and discovered another route to the golden book. I joined forces with the glittery kingdom known as Net Galley who I had discovered had Die For Me on their website just waiting to be read. Harper Collins (the US publisher of Die For Me) had placed a selection of books to be reviewed, so I chose a few, not wanting to appear to be obsessed by just one book. What happens? I get accepted for the other two and not the one I desperately wanted to read. Aargh! My cunning ploy thwarted again!

So I have decided to admit defeat. My begging and pleading has fallen on deaf ears. I will have to wait patiently like everyone else until the book comes out in 55 days, 22 hours and 34 minutes, no make that 33 minutes. So as I shuffle over to my over occupied bookcase, and adjust the spotlight that glows on the empty space dusted in anticipation and as all other redundant and unloved books are pushed aside to make room for this hoped for new addition, I remind myself that is it just a book and soon enough I will own my own copy. So for now, I will smile sweetly at the people who own an ARC of this book and congratulate them through gritted teeth on their cunning accomplishment.

Anyone wishing to donate their ARC copy to me, will be helping an obsessed woman retreat from the brink of manic hysteria.

Email ThisBlogThis!Share to TwitterShare to FacebookShare to Pinterest
Labels: life as we know it