I am such a shallow person, that I will fall in love with a book just by its cover. Luckily the covers normally have extremely entincing stories hidden within.  Here are three that are tempting me at the moment.

1) Seven Sorcerers by Caro King.
This book was released by Quercus in 2009, I can't think how this book slipped past my radar.
Here is the blurb from Amazon.
Nin had never liked Wednesdays, but this one took the biscuit. On this Wednesday she woke up to find that it was raining buckets and that her brother had ceased to exist. Ninevah realises she is the only person to remember Toby because whoever took him is about to make her disappear too. Enter Skerridge the Bogeyman, who steals kids for Mr. Strood. With his spindle, he draws all memories of Nin out of her mother's head. Nin escapes to the Drift, the world that her new friend Jonas and Mr. Strood inhabit. But the Drift is filled with the fabulous and the dreadful; tombfolk, mudmen, and the spirits of the seven sorcerers who once ruled the land. What is the secret of the Seven Sorcerers, and will Nin and Toby escape their fate at the House of Strood? 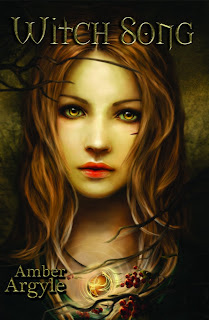 2) Witch Song by Amber Argyle
I just love this one! The eyes are just so haunting.
The blurb from Barnes and Noble.
The world is changing.
For thousands of years, witch song has controlled everything from the winds to the shifting of the seasons. But not anymore. All the Witches are gone, taken captive by the dark Witch, Espen.
As the last echoes of witch song fade, Espen grows stronger...

3) Ondine: The Autumn palace by Ebony McKenna
Published by Egmont in February 2011. I think this may be Book 2 in the series.
Here is the blurb from Amazon
One boy, one girl, one plot to be foiled! Hamish the gorgeous man (and part time ferret) has a new job with the Duke as a spy in his Autumn Palace. So Ondine goes with him. She imagines a hugely romantic escapade together that involves lots of kissing. What she hadn't imagined was having to do endless laundry, go to school and keep Hamish the man a secret. All the while trying to find out who is plotting to kill the Duke. And if that weren't bad enough, it seems that Hamish is more interested in getting the Duke's attention than hers. Plus he's always in ferret form. Things can't go on like this! Can Ondine foil the would-be assassin, save the Duke and get her man back in gorgeous human form? It's going to take a little bit of magic, a lot of stolen kisses and some ferreting around...
Aren't  they gorgeous. Which one do you prefer?