On Friday the 13th of May, I was invited to the Headline Blogger Party at their offices in London. I met up with Michelle from Clover Hilll Book Reviews and Sarah from Feeling Fictional before attending the event, where we browsed around the legendary Foyles.
All the event pictures in this post are thanks to the lovely Sarah, who has kindly allowed me to use them. 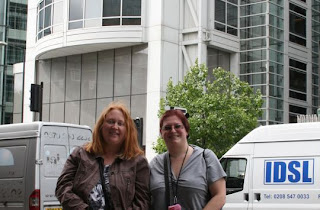 Here are Michelle and Sarah standing outside the huge offices of Headline which had a glass lift on the outside of the building, which as it rises gives you a panoramic view of London. Not that I saw it, as I had my eyes shut and was clinging to the poor lady in front of me, as my vertigo kicked into gear.

The blogger party began with a showcase of the books that Headline presently publish (some of which I will show you later in this post). We then took part in a quiz followed by a chat with the authors. I got to finally meet one of my favourite authors, Jenna Burtenshaw, who wrote the Wintercraft series. If you haven't read the two books already available in this series, then I strongly suggest you do. I also got to spend time with the lovely ladies, Sarah and Liz from My Favourite Books, as well as Carolyn and Laura from Book Chick City.

I also got to meet Maura and Sam, the lovely ladies from Headline who organised the event and helped to feed my book addiction.
The Headline Showcase amazed me, because I didn't realise the vast variety of books they published.
Here are a few of the books they showed us that I am really excited to read. 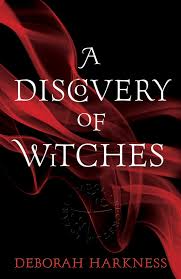 I have been coveting this book for quite some time, so to get a copy of it made my month!
Goodreads Summary
A richly inventive novel about a centuries-old vampire, a spellbound witch, and the mysterious manuscript that draws them together.
Deep in the stacks of Oxford's Bodleian Library, young scholar Diana Bishop unwittingly calls up a bewitched alchemical manuscript in the course of her research. Descended from an old and distinguished line of witches, Diana wants nothing to do with sorcery; so after a furtive glance and a few notes, she banishes the book to the stacks. But her discovery sets a fantastical underworld stirring, and a horde of daemons, witches, and vampires soon descends upon the library. Diana has stumbled upon a coveted treasure lost for centuries-and she is the only creature who can break its spell. 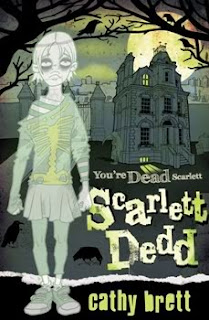 Cathy Brett is a brilliant illustrator and actually drew some caricatures of the the bloggers during the event. This book really shows her artistic brilliance.
Goodreads Summary
You're dead Scarlett...Previously a poor taste jibe from school enemies, now a statement of fact. Scarlett is absolutely mortified (in more ways than one) to discover that she's accidentally killed herself while trying to get out of a school trip. Even worse, she's taken her entire family with her. Life as a ghost is pretty dull - if only some of her friends were dead too...

This book deals with the relationship between identical twins. How could I resist? Julia did say to me that she hoped she had got it right with her twins in the book.
Goodreads Summary
Liza Haven couldn’t wait to escape the small village where she grew up with her perfect identical twin sister, Lee. Her life in LA as a stunt woman is reckless, fast and free – and that’s just the way she likes it. But when a near-fatal mistake drives her home, she finds Lee gone and everyone in the village mistaking her for her twin sister. Liza has to deal with her ailing mother, the family ice cream business, and Lee’s dangerously attractive boyfriend. Liza’s always been the bad twin, but as she struggles to keep up the masquerade and puzzle out where her sister has gone, she realises it’s not so simple. She’s spent her whole life getting away with it – is it finally time to face up to who she really is and where she really belongs? 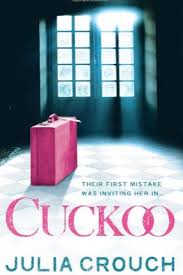 I have read such rave reviews about this book, so I was really excited to get hold of a copy.
Goodreads Summary
A dark, juicy, deliciously unsettling, read-it-in-one-sitting psychological drama.
Rose has it all - the gorgeous children, the husband, the beautiful home. But then her best friend Polly comes to stay. Very soon, Rose's cosy world starts to fall apart at the seams - her baby falls dangerously ill, her husband is distracted - is Polly behind it all? It appears that once you invite Polly into your home, it's very difficult to get her out again..

I haven't read any of Jill's book, but I am aware that she has written quite a few. She was really lovely and down to earth and had the most loveliest sparkly flip flops.
Goodreads Summary
When Ellie Kendall tragically loses her husband she feels her life is over. But eventually she’s ready for a new start – at work, that is. She doesn’t need a new man when she has a certain secret visitor to keep her company...
Zack McLaren seems to have it all, but the girl he can’t stop thinking about won’t give him a second glance. If only she’d pay him the same attention she lavishes on his dog.
Moving to North London, Ellie meets neighbour Roo who has a secret of her own. Can the girls sort out their lives? Guilt is a powerful emotion, but a lot can happen in a year in Primrose Hill..

This book won't be out until September, but it really has me curious.
Goodreads Summary
BexBex work out what has caused the spirits of these dangerous men to return to the streets of London before they wreak more death and destruction?
*Headline also have a new dystopian novel due out in February 2012 called Pure - and that is all I can tell you. Apart from the fact that I think it might just blow your mind!*
So there you are, some of the wonderful books presently on offer from Headline. Which ones are you interested in?
at May 23, 2011

Email ThisBlogThis!Share to TwitterShare to FacebookShare to Pinterest
Labels: showcase