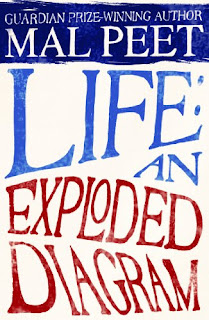 Life: An Exploded Diagram is the latest novel from multiple award-winning author Mal Peet, who won the Carnegie Medal for Tamar and the Guardian Children’s Fiction Prize for Exposure.


The book is a coming-of-age love story, set in Norfolk in the 1960s against the backdrop of the Cuban Missile Crisis. It has already received great acclaim from Patrick Ness and Anthony McGowan, and Walker have created a book trailer which was revealed on 27th May on Wondrous Reads along with the first extract, but you can also watch the trailer here, below!


You can read the fourth extract here, and the fifth extract will be placed on Undercover tomorrow.

For weeks soft fruits gave them cover. After strawberries, there were gooseberries, blackcurrants, raspberries. Frankie worked her sentence, weighing and loading, stacking the stained empty punnets. And at every opportunity, at increasingly risky opportunities, she would excuse herself
through a gap in a hedge, slip into the shade of a tree, amble behind a trailer, to be with Clem. They kissed avidly, clumsily, not knowing what to do with their sticky, juice-stained hands. They did not talk much; they were short of time, and breath. When they did speak, death often cropped up.
“I was dying for that.”
“God, my father would kill me if he knew I was…”
“My dad’d skin me alive…”
“Wouldn’t it be delicious to die like this?”

At first it was a game; it was a hazardous mischief. But not for long. They each soon found the hot days shrinking into the stolen minutes – ten, fifteen at most – when they were together. Other time became numb.
Clem trembled, waiting in hiding for her. Shook, physically. He found these moments hard to bear because it was like being too much alive. His own blood seemed to torment him.
"Yer got it bad, comrade,” Goz said, riding home.
The boys still went to the fields together but worked separately now. Clem’s distraction was proving uneconomic.
“Have I?”
“Yeah. And yer playing with fire. It’s a good job yer so bleddy wet.”

He couldn’t stop thinking about her. It was ridiculous. It was like a mental illness or something. A continuous rerunning of little films in his head. Her eyes slowly opening after a long snog. Tipping her head back to swing the hair away from her face. Pulling a damp strand of it from her
lips. The movement of her bum as she walked away. At home, he sat in the living-room trying to stop the projector, black out the images. Silently reciting the names of the kings and queens of England until the shameful bulge in his jeans subsided and he could stand up.
Ruth turned away from the telly.
“Wassup with you, Clem?”
“Nuthun. I’m orright.”
“You look like someone who’re lost a fiver and found a shillun.”
“I’m orright, Mum. Bit bored, is all.”
“You usually like this programme.”
“Yeah. Not very good tonight though, is it?”
George said, “Do you mind? I’m trying to watch this.”
Clem checked the state of his lap. He stood up. “I might go out for a bit.”
He spent the nights praying that his bed wasn’t creaking too audibly. Luckily, his grandmother was often loudly murmurous in the nights, praying for something else altogether. Clem synchronized his devotions with hers.

Hiding, waiting for him, Frankie felt angry. Angry that she hungrily fancied a badly dressed working-class boy like Clem Ackroyd. Angry that she couldn’t be with him whenever she wanted to. Angry that she should have to conceal herself from people who worked for her father. Then Clem would step through a gap in the hedge or brush aside a veil of leaves and her breath would catch in her throat and her whole body would come alight.
Over dinner, her mother looked at her. “What’s the matter, darling?”
“Pardon, Mummy?”
“You’ve hardly eaten anything. Don’t you like it?”
“It’s good. I’m just a bit tired.”
Nicole turned to her husband. “Gerard, how much longer are you going to continue this farce, treating your daughter like a labourer? She is exhausted. She can hardly lift the food to her mouth.”
“Nonsense, Nicole. It’s doing her the world of good. Look at her. She’s the picture of health.”
“She is too much in the sun, Gerard. She looks like a gypsy. Her nose is peeling.”
Mortimer dabbed his lips with his napkin then grinned.
“Very well,” he said. “Françoise, I’m putting you on parole. Time off for good behaviour.”
She looked across at him, frowning, not understanding. Parole was the French for “word” or “speech”.
“You don’t have to work any more,” her father said.
Frankie tried to keep her hand steady, lowering the heavy silver fork onto the tablecloth.
“It’s okay, Daddy. I like it, actually. The people are nice. Funny.”
“Françoise,” Nicole said. “What has that to do with anything?”
Frankie forced a shrug. “Nothing, I guess. I just like being in the fresh air. And it’s something to do. I’ll work until the end of the season.”
Gerard Mortimer leaned back in his chair. “Well said. Spoken like a farmer’s daughter, eh, Nicole?”
His wife pulled the corners of her mouth down and cut a neat slice from her veal for the spaniel who sat by her chair.

You can read the next extract tomorrow on Undercover tomorrow.