On Thursday 14th May, along with Sarah of Feeling Fictional, we had the privilege of being invited to the Piatkus event, where we got to see the amazing books they have on offer and the new books they will be bringing out during the year. For a bookaholic, it was a fabulous way to spend the afternoon.


For those of you who don't know, Piatkus is a commercial imprint with a unique identity within Little Brown Book Group.  Piatkus is presently celebrating it 30th anniversary and is renowned for the books it produces in the paranormal and romance genres. They recently published The Guardian Angel's Journal by Carolyn Jess-Cooke which I reviewed last month and you can find here.


I wanted to show you today, some of the brilliant books they have coming out later this year. After each title, I have included the book summary and its source, to give you an idea of what the book is about.

This is Rosamund Lupton's second standalone novel, which follows on from the massive success of Sister in 2010, which I am reading right now. This book is published on the 9th June 2011.

There is a fire and they are in There. They are in there . . .
Black smoke stains a summer blue sky. A school is on fire. And one mother, Grace, sees the smoke and runs. She knows her teenage daughter Jenny is inside. She runs into the burning building to rescue her.
Afterwards, Grace must find the identity of the arsonist and protect her family from the person who's still intent on destroying them. Afterwards, she must fight the limits of her physical strength and discover the limitlessness of love.(PIATKUS)

This is a brand new series for Keri Arthur and is a spin off from the Riley Jensen Guardian series. This book will be released in September 2011, followed by the second book, Darkness Rising in October 2011.
Born from a lab-enhanced clone mother and an Aedh father, Risa Jones can not only talk to the souls of the dying and the dead, but she can see reapers and walk the grey fields that divide this world from the next. They are skills she rarely uses, however. But when her mother asks her to help the parents of a little girl locked in a coma, she reluctantly agrees. What she discovers terrifies her: someone has ripped the girl's soul from her flesh. As it turns out, a creature consuming the souls of the innocent - and not so innocent - is the least of her problems. Because someone wants to rip open the gates that divide hell from earth, and Risa is a key component in their plans. And the only person standing between her and disaster is a reaper who isn't exactly on her side. (AMAZON)

This is book one in The Smythe-Smith Quartet. Now normally historical fiction wouldn't really be a genre I would pick, but all the books Piatkus showcased left me wanting them. This will appeal to women who love romantic comedies and  women's fiction - think Bridget Jones meets Jane Austen! This book is published on the 2nd of June 2011.


Honoria Smythe-Smith, the youngest daughter of the eldest son of the Earl of Winstead, plays the violin in the annual musicale performed by the Smythe-Smith quartet. She's well aware that they are dreadful. In fact, she freely admits (to her cousins) that she is probably the worst of the bunch. But she's the sort who figures that nothing good will come of being mortified, so she puts on a good show and laughs about it. Marcus Holroyd is the best friend of Honoria's brother Daniel, who lives in exile out of the country. He's promised to watch out for Honoria and takes his responsibility very seriously. But he has his work cut out for him when Honoria sets off for Cambridge determined to marry by the end of the season. She's got her eye on the only unmarried Bridgerton, who's a bit wet behind the ears. When her advances are spurned, can Marcus swoop in and steal her heart in time for the musicale? (Amazon) 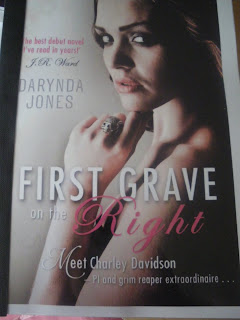 This is the debut novel by Darynda Jones and won a number of awards including the 2009 Golden Heart in the Paranormal Category.The first book in the series will be published in November 2011 followed by the second and third in January and February 2012.
Private investigator Charlotte Davidson was born with three things: a smoking hot ass; a healthy respect for the male anatomy; and the rather odd job title of grim reaper. Since the age of five, she has been helping the departed solve the mysteries of their deaths so they can cross. Thus, when three lawyers from the same law firm are murdered, they come to her to find their killer. In the meantime, she's dealing with a being more powerful, and definitely sexier, than any specter she's ever come across. With the help of a pain-in-the-ass skip tracer, a dead pubescent gangbanger named Angel, and a lifetime supply of sarcasm, Charley sets out to solve the highest profile case of the year and discovers that dodging bullets isn't nearly as dangerous as falling in love. (Darynda's website) 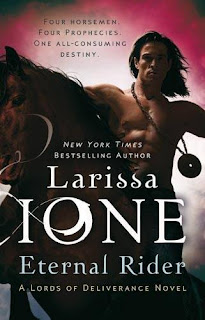 I am so excited by this, that I have already ordered it from Amazon! This is book one of a quartet that centres on the Four Horseman of the Apocalypse, know as the Lords of Deliverance series. This is the first time Larissa Ione's books will be published in the UK. Her Demonica series will be released in the UK starting in July.  This book is already available to buy.
The prophecies were there but no one listened. Until now. They are the Lords of Deliverance and they have the power to usher in Doomsday ...or prevent it. His name is Ares, and the fate of mankind rests on his powerful shoulders. If he falls to the forces of evil, the world falls too. As one of the Four Horsemen of the Apocalypse, he is far stronger than any mortal, but even he cannot fight his destiny forever. Not when his own brother plots against him. Yet there is one last hope. Gifted in a way other humans can't - or won't - understand, Cara Thornhart is the key to both this Horseman's safety and his doom. But involving Cara will prove treacherous, even beyond the maddening, dangerous desire that seizes them the moment they meet. For staving off eternal darkness could have a staggering cost: Cara's life.(Amazon)

This is listed as a 'fresh, bitingly funny voice who's really up and coming in the supernatural fiction realm'. For fans of Christopher Moore and Chuck Palahniuk.

Over the past few thousand years, Fabio has come to hate his job. As Fate, he’s in charge of assigning the fortunes and misfortunes that befall most of the human race—the 83% who keep screwing things up. And with the steady rise in population since the first Neanderthal set himself on fire, he can’t exactly take a vacation.
Frustrated with his endless parade of drug addicts and career politicians, it doesn’t help watching Destiny guide her people to Nobel Peace Prizes and Super Bowl MVPs. To make matters worse, he has a five hundred year old feud with Death, and his best friends are Sloth and Gluttony. And worst of all? He’s just fallen in love with a human.
Sara Griffen might be on Destiny’s path, but Fabio keeps bumping into her—by accident at first, and then on purpose. Getting involved with her breaks Rule #1, and about ten others, setting off some cosmic-sized repercussions that could strip him of his immortality–or lead to a fate worse than death.
Fated is a dark, irreverent comedy about fate, destiny, and the consequences of getting involved with humans.(S.G. Browne's website)

This is the first book in the Regency quartet, where each book has a fairytale twist. This is published in August, with the second book coming out in September.


Miss Kate Daltry doesn't believe in fairy tales . . . or happily ever after.
Forced by her stepmother to attend a ball, Kate meets a prince . . . and decides he's anything but charming. A clash of wits and wills ensues, but they both know their irresistible attraction will lead nowhere. For Gabriel is promised to another woman—a princess whose hand in marriage will fulfill his ruthless ambitions.
Gabriel likes his fiancee, which is a welcome turn of events, but he doesn't love her. Obviously, he should be wooing his bride-to-be, not the witty, impoverished beauty who refuses to fawn over him.
Godmothers and glass slippers notwithstanding, this is one fairy tale in which destiny conspires to destroy any chance that Kate and Gabriel might have a happily ever after.
Unless a prince throws away everything that makes him noble . . .
Unless a dowry of an unruly heart trumps a fortune . . .
Unless one kiss at the stroke of midnight changes everything.(Amazon)

I am extremely excited by this one. It is a debut novel and has already won the YouWriteOn  Book of the Year award 2010.  It is a historical romance set in London during the time of the Plague and the Great Fire of London. That time period alone has me desperate to read it. This will be published on the 4th August 2011.
Susannah Leyton has grown up behind the counter of her father's apothecary shop, surrounded by the resinous scents of lavender, rosemary, liquorice and turpentine. More learned than any apprentice, she concocts soothing medicines and ointments with great skill. Content with her life, Susannah is shocked when her widowed father announces his intentions to marry again, and later becomes caught in a battle of wills with her new step-mother. When she receives a proposal of marriage from handsome and charming merchant Henry Savage, she believes her prayers have been answered and resolves to be a good wife to him. But Henry is a complex and troubled man, haunted by his memories of growing up in Barbados. As the plague sweeps through the city, tragedy strikes, and the secrets of Henry's past begin to unfold ...(Amazon)
So what an amazing line of books to come. My eclectic taste has me desperate for them all, but which ones do you now want???
at May 16, 2011