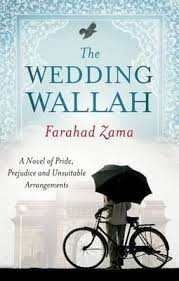 Published by Abacus in April  2011

Book kindly sent to me by Jenny at Abacus.

Mrs Ali could have sworn that the thief had a sneaky look in his eye as he crept closer to his target. She watched the crow drop on the ground from the lower branches of the guava tree. She was in a cane chair, on the veranda, looking out on to the front yard where she had laid tamarind on an old sheet to dry in the spring son. Mrs Ali was aware that modern women like her niece Nafisa bought their tamarind in little plastic packets, as and when they needed it, from the supermarket. They even stored it in the fridge. But Mrs Ali wasn't like that. She still stuck to the old, proper ways and bought her entire year's supply fresh, when it was in season, and cheap, like now.


Mr Ali, the Wedding Wallah, is still very popular at helping arranged marriages occur amongst educated clients and wealthy families. He is over the moon, when it appears he may have been able to make a match for his niece Pari, an impoverished pretty young widow and Dilawar, the handsome businessman from the city.

I will admit to being a little apprehensive about reading this third book in the series. I absolutely loved the first book  'The Marriage Bureau for Rich People, however, I really did not enjoy the second book 'The Many Conditions of Love' as much at all. Thankfully, this book renewed my interest in the day to day lives of Mr Ali and his friends and family.

In fact, this book seemed to be a lot more realistic and darker than the previous two books, as it dealt with two topics which I presume are quite politically hot at this moment in time in India. Firstly the book looks closely at the legalisation of homosexuality. This really shocked me, discovering how backward they were in their views of gays and lesbians. I had never considered that other countries may still consider this to be wrong and felt thankful to live in a society where this is no longer the case. Poor Dilawar is being pushed into a marriage to give him the respectability his mother craves for him and the family name. Dilawar, weakened by society's attitude of his sexuality, struggles to stand up for his rights. It was quite sad to read and I couldn't help but feel his pain at not being allowed to be himself.

The second topic dealt with in this book is the importance of the Naxalites, a loose term used to define some rather violent groups who cause destruction and kidnappings in the name of landless labourers. They have an almost Robin Hood mentality but with sheer brutality involved to get their rewards. I am presuming that they still exist in India, as I could not find any information to contradict this point.  The actions they carry out within the book, bring home the harsh reality of the inequality occurring in India and once again allows you to feel thankful that you don't have to live in similar conditions.

This book also highlights the changes occurring India, which seem to be pushing it into the modern world. The young are restless to live like the youth from Westernized societies and mobile phones and social networking are competing with the more traditional ways of the country.  You realise straight away that the older generations are reluctant to move forward with technology and change. I love the contrast of the young and the old. The ways of the old still coexisting with the modernness of the young.

The characters are just adorable.  It was lovely to revisit these characters and see how their lives have progressed. I loved returning to  Aruna and Ramanujam's relationship, to  see it continue to blossom, allowing Aruna to stand on her own two feet. Mrs Ali, continues to entertain me with her crafty ways and causing mayhem with her nosy neighbours. I felt a little annoyed with Rehman though, as I wanted him to open his eyes and see what beauty lies before him.

The book ends on a little bit of a cliffhanger, as there are a couple of situations that have been left unresolved, so I look forward to reading more in the future.

My only niggle with this book was that certain events that occur at the end of the book were told rather than shown and I would have liked to see a more dramatic ending to a situation that occurs.

If you like The No1 Ladies Detective series, then you will enjoy this book too, as I feel it mirrors the simplicity of life in the same way the Alexander McCall Smith series does.

An enjoyable read, that educates you without you realising!
at May 02, 2011