The Big Break with Josephine Angelini

The Big Break is over the moon to welcome the delightful Josephine Angelini, author of one of my favourite books this year, Starcrossed.

Firstly, can I thank you for joining me today on my blog.
Thanks for the invite!

What did you do for a living before writing became your chosen career?
I was a nightclub bartender in New York City and Los Angeles for, like, a decade. If I never have to hear the words “Put Your Hands In the Air” or “Holler Back” or “It’s Your Birthday” again I will be a-okay with that.
In the beginning I was trying to write screenplays, but I never got the hang of them. I think I’m too much of a gasbag to limit myself to 90-110 pages. And yes, I’m aware that after ten years I probably should have taken the hint and explored other career options, but I’ve always been a tad stubborn (holler back, yo).

How long did it take you to write your debut novel ‘Starcrossed’?
It took me about a month to outline it and get a skeleton for the trilogy, and then it took me 8 months to write it.

What was your inspiration for writing ‘Starcrossed’?
I saw a copy of the Iliad sitting next to Romeo and Juliet on my bookshelf and wondered why no one had tried to do a modern day take on Homer’s classic, focusing on the love story, and set in high school. It was a good, old-fashioned Eureka moment.

I understand you husband was involved in getting ‘Starcrossed’ published, can you tell us a little bit about how he managed this?
When I finished my manuscript I had no idea what to do with it, and neither did my husband. He’s a screenwriter; so all of his contacts are in the movie industry, not in the publishing world. He turned to Facebook. A friend of a friend (the actual connection of how they “friended” each other is still a bit hazy) was a manager here in LA named Rachel Miller. She never takes unsolicited material, but she was a bit bored that morning, loves YA books, and decided to read the first chapter just for kicks.
She fell in love with my book and sent it that day to Mollie Glick, a literary agent in NYC. Mollie only promised to read one chapter as well, and ended up staying up half the night to finish it. The next morning I awoke to a manager and an agent and a few weeks later I had a publishing deal to boot. I didn’t even know that my husband had sent my manuscript to anyone. Thanks, honey!

What was your first reaction when you found out that your book was to be published?
The manuscript wasn’t supposed to go out wide for another week, so the call was unexpected. I was at the gym and trying to answer the phone and get off the machine without breaking my neck. My
agent got a pre-emptive offer from Harper Teen. I had to ask what that meant, and she gave me a number.
I don’t remember much of the middle bit of the conversation because all I could think was “Don’t drop your phone. You can’t afford another one right now. Oh, wait...”

How long did it take for your book to reach publication after the initial agreement?
I agreed to the deal in February of 2010, and my book was published here in the US on May 31st, 2011. It took longer to get the book out to stores than it did it write it, and I hear that my book got out there pretty fast!

What was happening to your manuscript during this time?
The first 4 or 5 months my book was in edits. I know that sounds like a long time, but actually, not that much of my book changed. It just takes forever to pass it back and forth between the editor, the editor’s boss, the multiple copy editors and whatnot. There are a million little things that can be tweaked along the way, and all of changes are mostly just to make the story clearer, more concise, and to iron out any bugs in the plot.

How did you keep yourself occupied as you waited for publication day?
I wrote book 2, DREAMLESS. Then I edited it. Then I started book 3 (still unnamed). I also started promoting STARCROSSED, doing interviews, guest blogging, and Tweeting my brains out. It isn’t enough just to write a book—you have to get people to buy it as well. Crazy, isn’t it? Before the first book was even out I was already a few chapters into the third book. It is a long process.

How did you celebrate on publication day?
I went out for dinner with a handful of friends, and my husband of course. I think I was in bed by 10. Honestly, pub day is the beginning, not the finish line. I’m working just as hard now to promote STARCROSSED as I was a few months before it came out.

Your book has received many excellent reviews, how does that make you feel?
Who wouldn’t feel great with all that ego buffing? But then again, my husband doesn’t let me read any negative reviews. I know they’re out there somewhere, but I’m blissfully ignorant of them. Its all sunshine a lollipops for me!

Can you tell us anything about the sequel to ‘Starcrossed’?
DREAMLESS is darker, and it has a lot more action. A large part of the story takes place in the Underworld, so as you can imagine, it’s grittier than STARCROSSED. Oh, and I also introduce a new character named Orion. Can’t wait for everyone to meet him!

Do you write full time now?
Yes, thankfully. This whole writing/promoting thing is a more than full time job. I don’t think I’ve taken a full day off in months—but I’m not complaining! This beats the heck out of slinging drinks until 4 in the morning.

Tell us what a typical writing day would be like?
I work in two shifts. In the morning I edit what I wrote the night before and plan out the next “beat” I’m going to tackle. Then I take a break and run errands and all that jazz. Then around 6 in the evening I sit back down and write new pages. I work like this so I can sleep on my work, look at it fresh in the morning, and make sure I like it before I move on.

What advice would you give to aspiring and unpublished authors?
Well, I think the thread of this whole interview for me has been about how long everything takes. It took me years of writing without even getting agent for me to finally figure out what genre was right for me, and then even more time for me get to the point where I had something that was ready to publish. Then, even though the agent and publisher part went fast for me, there was a long time between the deal and the pub date.
I guess my advice to any aspiring writer is to be ready for a long haul. There’s this joke in the arts that everyone who makes it is actually a 7-year “overnight” success story. I couldn’t agree more. Don’t get discouraged—just keep writing.

Thank you Josie for sharing your inspirational story with us. I can't wait to get my hands on Dreamless next year. 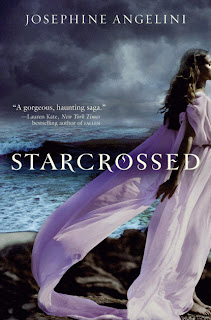 If you haven't read Starcrossed yet, I strongly suggest that you do. It is available to buy right now.
To find out more about Josephine Angelini, please visit her blog here.
at June 30, 2011