The Write Way with Alan Gibbons and a Giveaway

The Write is a new feature on the blog which I will run occasionally allowing authors to let us into the secrets of the way they like to write.

My first guest is Alan Gibbons, author of An Act of Love which is published by Orion's Children Books. Alan has been writing books for children for 17 years and won the Blue Peter Book Award in 2000 for his bestselling book Shadow of the Minotaur. He has won many awards during his writing career and was shortlisted for the Carnegie Award twice in 2001 and 2003.

What inspired you to write ‘An Act Of Love’?
The idea was floating around for a while. With all the news coverage of the ‘war on terror’ it was hard to ignore the subject. The final trigger was the July 7th bombings in 2005. I was driving down the motorway to London when the overhead signs brought up the message. It said “London is closed.” It felt like the end of the world. In a way, it was.

What are your main forms of inspiration normally?
It goes without saying that reading is a huge stimulus, but my main inspiration has always been music, funnily enough: Sam Cooke, Bob Marley, Lennon and McCartney, Marvin Gaye, Dusty Springfield, Rodrigo’s Concerto D’Aranjuez, anything. I strive for a musicality in my writing.
Similarly, great human speeches take me to places way beyond my own experience: Martin Luther King, Muhammed Ali, Frederick Douglas.
I think I come from a very oral culture in the North West of England so I enjoy my speaking as much as the writing.

From reading about your book, it is clear that your research was meticulous, how long did you spend researching it before you began writing it?
Oh, it was month. I read a few dozen books about terrorism, the role of the West in the Middle East, the Army’s experience in Afghanistan and political strands of Islam. I also talked to lots of young Muslims and a number of serving British soldiers.

Was the book completely planned out before you began writing, or did you just go with the flow?
My publisher Fiona has always pressed me to be a bit less spontaneous and a bit more planned. This was a book that would not have seen the light of day without lots of pre-planning. The synopsis took several weeks and gave me a framework within which to experiment with the voice, first and third person narrators, chapter length, etc.

The books deals with a highly emotional theme, how did you find it affected your own emotions as you wrote it?
I’m an emotional person and an emotional writer. I have never been very cerebral. I write from the heart and the gut and it was the same with this book. My intuitive hatred of racism of any kind burns through every word.

When you are writing your first draft, how many words do you aim for each day?
I write about 2,000 words a day and about 1,000 probably survive into the final draft.

How long did it take you write the first draft?
I think it was about four months. I experimented with a second person narrator ‘You’ but it did not give the emotional involvement I craved so I reverted to first and third person narrators.

Please explain your writing process after the first draft was finished?
I sent the draft to Fiona, my publisher. She identified two major weaknesses. The second person voice didn’t work and I was overloading the narrative with the weight of research. So I changed the narrative voice and trimmed the background details that were becoming too intrusive. Then my wife and one of my sons read it. I took their views on board and we were there.

When is your ideal time to write? Morning, afternoon or evening?
I visit schools and libraries and lead teacher training sessions most days so I write between six thirty and nine thirty every evening when I get home or to some soulless hotel where there is little else to do. I don’t drink or smoke so I write or read then watch Newsnight.

Which authors inspired you whilst growing up?
Robert Louis Stevenson, Erich Kastner, H Rider Haggard, Dickens and C S Lewis were very influential. I also read Children of the New Forest Biggles and the Bobbsey Twins. I was quite eclectic. Another huge influence was Marvel Comics.

Who is your favourite author now?
My favourite living author is Stephen King. I enjoy Khaled Hosseini. Among my YA colleagues I have huge respect for Philip Pullman, Bali Rai, Malorie Blackman, Marcus Sedgwick, Cliff McNish, Bob Swindells and many more. Two recently deceased giants are Robert Westall and Robert Cormier.

Apart from your own books, which other book do you wish you had written?
I would name seven: Great Expectations, Jane Eyre, To Kill a Mocking Bird, One Day in the Life of Ivan Denisovich, We’re going on a bear hunt, Gorilla and The Gruffalo.

Thank you Alan for joining us today and giving us an insight into your writing life. 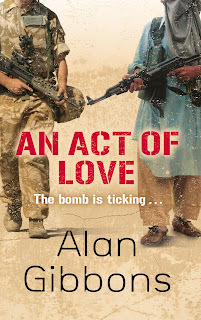 An Act Of Love is available to buy now.
If you would like to know more about Alan Gibbons and the books he has written please click here.


*********
I have one copy of An Act Of Love to giveaway today and it is an INTERNATIONAL competition, which closes on Friday 10th June. In order to enter all you have to do is fill out the form below. Good luck!